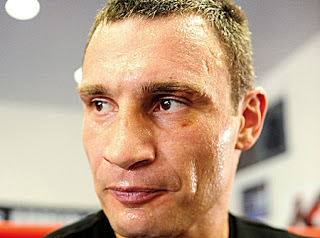 Currently ranked number 9 by The Ring Magazine in their pound for pound ratings and holding the second highest knock out ratio of any heavyweight.
Only Rocky Marciano has knocked a higher percentage of opponents out. Sounds like Vitali is an exciting fighter – its open for debate folks.

How do you remember boxers ten years after they have retired? The quality of their opponent, exciting styles, big knockout’s or being in close exciting fights. Depth in a division certainly helps fighters and sets opinions in stone. Joe Calzaghe is one of my favourite boxers – he will always be remembered as a good fighter because of his exciting style however if he was born ten years earlier or ten years later and achieved the same he would be remembered as a great. Imagine Calzaghe unbeaten against Benn, Eubank, Watson and Collins – that’s without throwing any American boxers into the mix. Likewise competing in the super six tournament would have enhanced his career.

The brothers K have the same problem as Joe Calzaghe. Who is there for them to fight to make it competitive? The don’t do themselves any favours by not even fighting the best around – I mean come on a laboured points decision against Dereck Chisora is not exactly the stuff of legends. Chisora with a record of 15 – 2 before entering the ring against Vitali Klitschko was not even on a winning streak. Since his victory against Sam Sexton in September 2010 Chisora waited ten months before losing to Tyson Fury, won a six rounder on points before losing a potentially controversial points decision to Robert Helenius. So why did Klitschko decide to fight Chisora – surely there are more worthy opponents out there?

If Klitschko was competing in the era of a prime Lewis, Tyson, Bowe and Holyfield the fights would be more competitive. Klitschko wouldn’t be able to get his own way and control the fights with his overpowering jab. Even the like of David Tua and Oliver McCall would be a step up in class from the remainder of the division.
Klitschko did fight Lennox Lewis and appeared in control of the fight until Lewis stopped Klitschko by cuts. 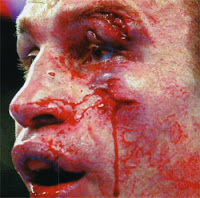 The fight was Lennox’s last fight of his career and did come into the ring looking out of shape but still managed to land enough strong punches to open serious damage on Vitali’s face and eye. It was not caused by a single blow or a clash of heads which showed that Lewis had a plan b and found a way to defeat Klitschko. Lewis may well be the only Hall of Fame fighter on Klitschko’s resume.

The difference with being a heavy weight and in a poor weight class and a lower weight for example a lightweight is that there is nowhere to go. Would Manny Pacquiao or Floyd Mayweather have the same reputation and be remembered as well when they go if they stayed at lower weights through out there careers? Obviously their bodies have grown from when they first came on the scene however this is not the sole reason for them climbing the divisions. It is to enhance reputation and fight the best names out there. There is nowhere for Vitali to go so he can only fight what is available to him.

The potential fights available to Klitschko to get the world to take notice are few and far between. Infact I can only see one option for Klitschko but I don’t think it will happen and if it does not how it should happen. Klitschko needs to fight and win by one punch knock outs in his next few fights against the best out there. He needs to take a punch sometimes to land a blow. This may increase the risk factor for him however if he wants to be remembered his fights need to be more competitive. Potential fights for Vitali are Alexander Dimitrenko, Denis Boytsov or purely from a size perspective Tyson Fury. There may be better boxers out there than Fury however Fury’s size would pose a different option for Vitali than the majority of the fighters. Alexander Povetkin seems in no hurry to fight either Vitali or Wladimir seemingly happy for one or both to retire before challenging for a belt. 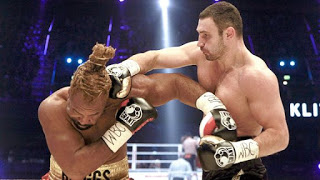 The fight Vitali needs though is David Haye. Haye would attract interest outside of Germany raising the profile. The fight either needs to be at Wembley or Las Vegas. Wembley the preferable option as the Klitschko’s support can travel easily and they are used to fighting in football stadiums. If the fight happens in Germany it would seem as Vitali is trying to play it safe again but giving up home territory for neutral or an “away” fight could do wonders for attracting new fans to look fondly on his career when he retires. If the fight ever happens – (which looks extremely unlikely) then Vitali must fight aggressively and look to knock Haye out. It’s a fight that could define his career.

I started off by writing that the Ring rank Vitali at number 9 in their pound for pound ratings. I disagree on two fronts. The first is that I would rate Vitali higher than his brother (ranked 7). Secondly I could name at least ten fighters who I would rank higher pound for pound than Vitali. In no particular order you have Pacquaio, Mayweather, Martinez, Ward, Hopkins, Donaire, Bradley, Bute, Gamboa, John and Marquez.

I don’t think it is Vitali’s fault that he won’t be remembered by me and many others as a great boxer. You can only fight what is available to fight. He hasn’t ducked anyone because there is no one to duck. Chris Arreola and Thomas Adamek didn’t last the distance against Klitschko. There are not many who have a better chance than either of those two of beating him. I would have loved to have seen Vitali against a prime Tyson who ignored reach disadvantages to take his opponent on the inside. A larger than life Riddock Bowe would have caused an altogether different fight for Vitali. If he won those ‘fantasy’ fights comprehensively then his CV would have been in better shape that it is now.