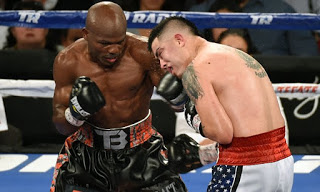 In the annals of boxing, there have been precious few fighters with the first name Tim.

There was of course the very fine heavyweight Tim Witherspoon, who as a fifteen fight novice gave Larry Holmes hell in a 1983 world title fight which he lost on a split decision, eventually winning the title twice in the mid-eighties. There was also Tim Littles, who challenged James Toney for the super middleweight title in the 1990s.

Two-weight world champion Tim Bradley might just be the best Timothy in the history of boxing, and on Saturday night he proved that at 32 he still has plenty left in the tank, as he stopped the normally unstoppable Brandon Rios in nine rounds, retaining his WBO welterweight title.

Bradley (33-1-1, 13 KOs) looked sensational from the opening bell, taking the fight right to Rios, showing blazing hand speed and making his opponent look ponderous and pedestrian in the process. Bradley fought at a tremendous pace, and by the middle rounds it was clearly not a case of who would win, but if he could become the first man to stop the granite chinned Rios. 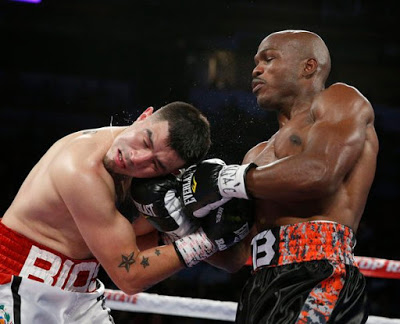 Former WBA lightweight champion Rios – lauded for his exciting give-and-take style and most famous for his epic trilogy with Mike Alvarado and his losing effort against Manny Pacquiao – had the backing of the majority of those in attendance at the Thomas and Mack Center in Las Vegas, but it was painfully clear from early in the fight that it wasn’t going to be their man’s night.

Going in to the ninth, Bradley had won every round on all three score cards, and the normally dogged Rios looked thoroughly disheartened. A body shot dropped him for only the second time in his career, and although he beat the count, a Bradley flurry dropped him again, at which point referee Tony Weeks waved the fight off.

“I did exactly what Teddy told me to do,” said an ecstatic Bradley after the fight. “I took a piece of him every round.”

A dejected Rios (33-3-1, 24 KOs) said “the better man won. I have no excuses. I think I’m done,” indicating that at just 29 he is considering hanging up his gloves. Sadly, on Saturday night’s evidence, that might be the right decision.

Veteran coach Teddy Atlas was making his debut in Bradley’s corner, and his impact was dramatic from the onset. Bradley’s mobility was excellent, he was far harder to hit than normal, and he punched with authority throughout the contest. His ability to stay “in the pocket” and catch Rios at will while avoiding punches in return was reminiscent of a fighter he knows well – Manny Pacquiao. 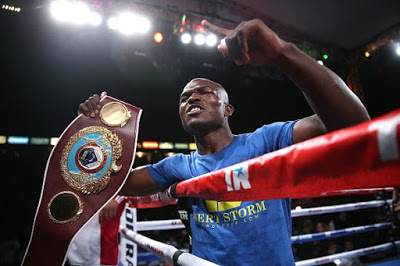 On this evidence a Bradley v Pacquiao rubber-match might not be such a hard sell. All fight fans remember how Bradley was given something of a gift decision over the Filipino when the two first met in 2012. Pacquiao dominated their 2014 rematch, but off the back of last night’s performance and Manny’s disappointing showing against Floyd Mayweather in May, right now a third meeting looks like a pick ’em fight.

Bradley is box-office right now, and even fights against WBA champ Keith Thurman, IBF titleist Kell Brook and contenders like Amir Khan, Shawn Porter and Danny Garcia would be intriguing match-ups. Of course the bout he would clearly want is a crack at Floyd Mayweather, should the former pound-for-pound king decide to return to the ring in 2016.

Interestingly, and for whatever reason one might care to venture, Mayweather never showed interest in fighting Bradley, even though it was an obvious pairing for many years. If Bradley were to follow up Saturday’s impressive performance with another big win over one of the fighters listed above – or maybe even send Manny Pacquiao into retirement – a fight between him and Mayweather might well be the only game in town.