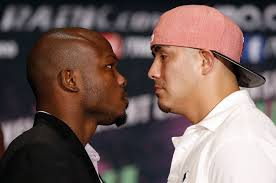 Two genuine warriors of the ring go head-to-head in the biggest fight of the weekend when Tim Bradley takes on Brandon Rios for the vacant WBO welterweight title at the Thomas and Mack Center in Las Vegas tonight.

The match-up is an intriguing clash of styles between the rugged yet skilful boxer in Bradley, and the brawling, all-action Rios. Both men have been involved in classic fights in the past, and fans will be hoping for another thriller. Rios fought his heart out in two crowd-pleasing battles with Mike Alvarado in the first two instalments of their trilogy, while Bradley’s war with Ruslan Provodnikov was 2013’s Fight of the Year. 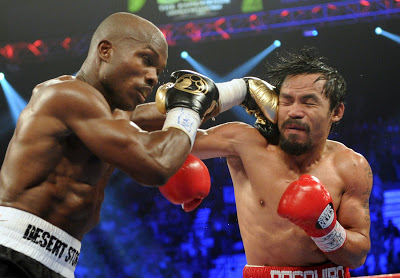 32-year old Bradley’s (32-1-1, 12 KOs) only loss in an eleven year career came in his rematch with Manny Pacquiao in 2014 – Bradley having taken the first encounter between the two on a highly controversial split decision in 2012. He has held world titles at both junior welter and welterweight, and beaten top names like Junior Witter, Kendall Holt, Lamont Peterson, Devon Alexander and Juan Manuel Marquez, as well as the debatable victory over Pacquiao and the thriller over Provodnikov. 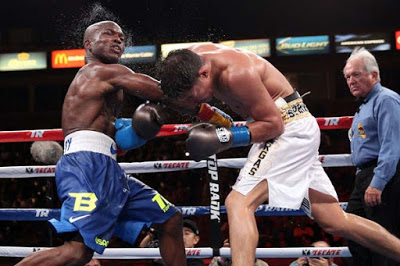 Last time out in June of this year, Bradley ended the unbeaten run of contender Jessie Vargas, although he almost came a cropper in the final round. Bradley was coasting to a one-sided points win, when Vargas nailed him with a clubbing right hook late in the twelfth. As Vargas searched desperately for a follow up shot, referee Pat Russel jumped in and called time with ten seconds left on the clock, claiming he had heard the bell to end the contest. Bradley would ultimately win a lopsided decision, but there were some fans who believed Vargas had been robbed of a golden opportunity, and was deserving of a rematch.

As in his thriller against Provodnikov where Bradley had to climb off the canvas twice and appeared out on his feet several times during the bout, Tim showed againt Vargas that he possesses a great chin and amazing recuperative powers, tropes he may need once again tonight. 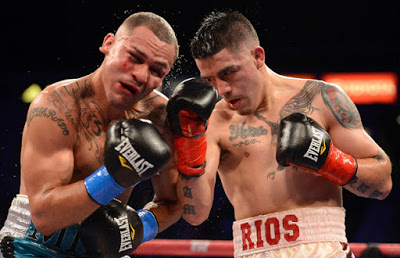 29-year old Brandon Rios (33-2-1, 24 KOs) remains one of the most compelling and exciting fighters in boxing. despite losing a little of his lustre in the past couple of years. There was a time – back when Rios was a marauding and seemingly unstoppable lightweight – where the Texan looked destined to become one of the biggest names in the sport. Between 2010 and 2012, Rios claimed the scalps of previously undefeated prospect Anthony Peterson (brother of Lamont), Miguel Costa (for the WBA lightweight title), Britain’s John Murray, Richar Abril and the previously undefeated Mike Alvarado.

Displaying fearsome punching power, stamina to burn and a chin as good as anyone’s in boxing, Rios was at his best in trench warfare, exemplified in his gruelling wins over Murray (TKO 11) and Alvarado (TKO 7), soaking up the best his opponent could offer and absorbing some hellacious shots in the process before overwhelming his foe with a combination of power and sheer will-to-win. 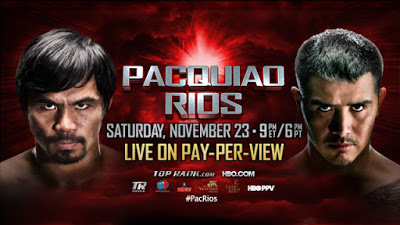 After going unbeaten in 31 contests, Rios would taste defeat twice in 2013. He was closely outpointed by Alvarado in a rematch, and well beaten by a comebacking Manny Pacquiao at the tail-end of the year in Macao, China.

It was almost three-straight defeats the following year, when Rios  – trailing on points to Diego Chavez – seemed to be the beneficiary of a dubious 9th round disqualification victory in a wild brawl in which both fighters contravened the rules often. The  fight was highlighted by Rios’ vociferous outbursts toward Chavez every time he felt he suffered a wrongdoing, with colourful language on a par with that of Joe Pesci’s in Goodfellas and Casino. 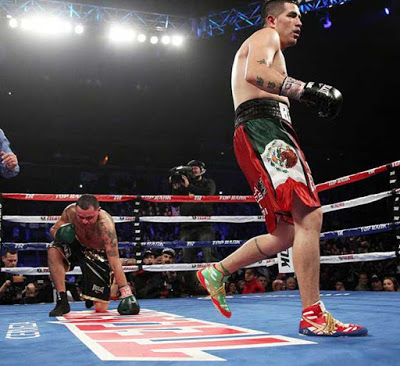 Rios was back in action earlier this year with the third instalment of his rivalry with Mike Alvarado, and this time it was one-way traffic, as Rios blitzed his rival in three rounds, Alvarado – renowned as one of the gutsiest fighters in the business, quit on his stool after being pummelled from pillar to post for nine minutes solid.

Although there were many stories claiming that Alvarado has suffered some kind of mental and physical meltdown prior to the fight, Rios could only beat what was in front of him, and he looked sensational doing just that. 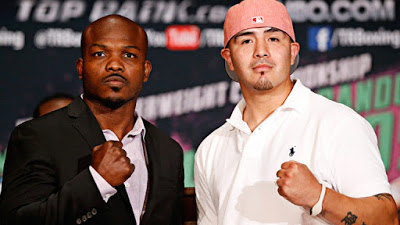 If one goes by their most recent fights – Bradley and his controversial win over Vargas and Rios’ destruction of a faded Alvarado, one has to believe that while the more illustrious and better schooled Bradley clearly starts as favourite, Rios must have a helluva shot at pulling off the upset.

Both men have been in brutal wars over the years, but Rios seems better built to handle them. While Bradley is always in phenomenal shape, at just 5′ 6″ he was not even a particularly large light welterweight and looks somewhat small at 147 lbs. While Rios is nowhere near as muscular as his rival, he is two inches taller with a naturally bigger frame.

If Bradley elects to box and move, and can stay focused and out of trouble for twelve rounds, he is more than capable of winning a decision and claiming the WBO belt for a second time. However, if he gets involved in a slugging match with Rios, he could find himself in deep trouble against a fighter who might not yet have reached his peak, and is gunning for the win that will put him in the welterweight big time.