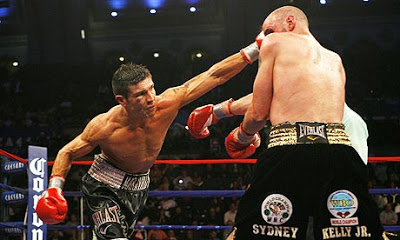 Sergio Gabriel Martinez rocked the boxing world on Saturday when he won a unanimous decision over Youngstown Ohio´s Kelly ”The Ghost” Pavlik.
The victory at the Boardwalk Hall in Atlantic city earned the Argentinian the WBC and WBO middleweight crowns. Martinez, the reigning WBC light middleweight champion, becomes the fourth Argentinian to win the world middleweight title, following in the footsteps of Jorge Castro, Hugo Corro, and the legendary Carlos Monzon.

35 year old southpaw Martinez (45-2-2, 24 ko´s) dominated the first third of the fight with his speed and movement, his fast right jab and strong left cross, with Pavlik scoring with some heavy shots of his own between rounds 5 to 9 and scoring a seventh round knockdown to draw the fight level. The final third was all Martinez, as he finished the stronger, despite conceding seven years to the 28 year old American. The judges scored the bout 116-11, 115-111 and 115-112, all to the new champion.

An ecstatic Martinez said in his post fight interview;
“It was a 12-round fight and I knew it would go the distance, I knew at the end I had to close strong. It was a 12-round plan and since I am the visitor, I knew it would be hard to win a decision. There is a lot of pride and emotion for me. It is a great honor for me and my country to fight fighters like this. When the last bell rang I knew I was the new world champion.”

Just as he had in his previous fight last December against Paul Williams, a fight he controversially lost, Martinez finished the fight the stronger man. At the end, Pavlik who suffered cuts over both eyes, looked exhausted, and was clearly the beaten fighter.

Pavlik´s trainer Jack Loew seemed at a loss to how his fighter had failed to press home his advantage after the eighth;
“We were coming on strong in the middle rounds and after the eighth round it seemed like he gave it away,” Loew said. “He couldn’t turn it around, and I don’t know why.”
A large part of Pavlik´s inability to close out the fight once he had come back into it must be due to boiling his big frame down to the 160 lbs middleweight limit. Pavlik stands a shade under 6’3”, and will surely be stronger at super middle and light heavy when he decides to move up.

After the fight, Pavlik (36-2, 32 ko´s) was gracious in defeat;
“Martinez is a smart fighter. He doubled up on his jab a lot after he cut me. I couldn’t get anything going after the eighth or ninth round. In the last third of the fight, around the eighth or ninth round, he began touching me a lot. I tried but it was very hard to come back at him. I couldn’t see out of my right eye after he cut it. I could not see his left hand coming. I wasn’t hurting, but he just had a lot of volume of punches.”

Pavlik´s cutman Sid Brumbach said after the fight that the cuts Pavlik sustained around his eyes would need around thirty six stitches, which means it will be some time before Pavlik will be in a position to implement the rematch clause he has with Martinez, an option he intends to pursue.
“It is hard to make 160, but I hate losing and I want to get those belts back.” said Pavlik.

One thing is for certain, Sergio Martinez has, at 35 and in a relatively short space of time, emerged as a new superstar in boxing. He is handsome and charismatic, and has an all action, high volume fighting style that is pure box-office. If he can maintain the level of performances he has recently displayed, he could hold on to his titles for some time to come.