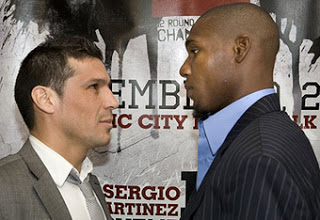 Two of the worlds finest pound-for-pound fighters go head to head in the early hours of Sunday morning when Sergio Gabriel Martinez defends his WBC and WBO middleweight titles against the supremely talented Paul ”The Punisher” Williams before a packed crowd at New Jersey’s historic Boardwalk Hall, site of the Tyson v Spinks fight in 1988, amongst many others.

The fight is a rematch between the two – Williams controversially outpointed Martinez a year ago in one of the very best fights of 2009.


29 year old Augusta Georgia resident Williams (39-1, 27 ko’s) is a well established star in the world of boxing, and has been since he upset Antonio Margarito for the WBO welterweight title in July 2007. Previously, the fearsome Mexican had suffered just one defeat, a cut eye loss to Daniel Santos, in eleven years. Overnight, the 6′ 2” Williams went from being ”Paul who?” to one of the most feared and avoided fighters in the business.

His new found aura of invincibility took a knock in his very next fight, when Williams was surprisingly out hustled by the slick Puerto Rican Carlos Quintana in February 2008. However, Williams was Tommy Hearns-esque in the rematch four months later, blasting the five inches shorter Quintana out in just 135 seconds.

If Williams display against Quintana sent shock waves though the boxing world, it seemed to have the same effect on the fighters themselves. Despite being a champion in a division ripe with talent, Williams failed to entice any of the division’s established stars to share a ring with him. Frustrated, Williams decided to move up in weight, whilst announcing that he would still make 147 lbs if a fight with a Mayweather, Cotto or Mosley etc were to materialize.

A proposed fight with middleweight champion Kelly Pavlik failed to materialize when Pavlik chose to take on, and lose to, Bernard Hopkins. Williams marked time with a one round knockout of an over-matched Andy Kolle in September 2008, and an eighth round TKO over fading former two-time world champion Verno Phillips three months later.

Williams needed a contest against one of the genuine ‘blue chip’ fighters of the boxing world, and he got in April 2009 when he met former undisputed light middleweight champion Ronald ”Winky” Wright, who’s loss to Bernard Hopkins the year before had been his first in eight years. Wright had been one of the dominant fighters of the decade, taking the scalps of stars like Felix Trinidad, who retired after the thrashing Wright gave him, and Shane Mosley, whom Wright twice outpointed.

Williams proved beyond doubt that he was a genuine star against Wright, and that he could box as well as punch, beating Winky by a near shutout unanimous decision.

Williams was now rated as pound-for-pound one of the best fighters in the world. His next opponent, although at the time virtually unknown outside of hardcore boxing fans, will surely become the fighter that Williams will be forever linked with, like Ali and Frazier, Tunney and Dempsey, Zale and Graziano, Eubank and Benn etc.

Sergio Gabriel Martinez turned professional in his native Argentina in December 1997. After compiling a 16-0-1 record in two years, Martinez made his American debut in February 2000 on the Barrera v Morales undercard in Las Vegas. Unfortunately, Martinez was over matched against an already battle hardened Antonio Margarito, and was TKO’d in seven rounds. It would be seven years before Martinez would box in the US again, and nine years before he would taste another defeat.

Initially Martinez returned to Argentina, but by 2002, he had uprooted to Spain, making Madrid his home. From 2002 to 2007, Martinez boxed extensively in Spain, and also three times in the UK. By April 2007, and with an impressive record of 38-1-1, the Argentinian decided it was time to launch another offensive on the United States.

This time there were to be no false starts. Going straight into a WBC light middleweight title eliminator, Martinez dispatched Mexican Saul Roman in four rounds, courtesy of a wicked body shot. Martinez racked up three more victories on US soil before stopping Alex Bunema in eight rounds to win the WBC´s interim super welterweight title.

In February 2009, Martinez retained his title with a controversial majority draw against hard hitting Puerto Rican Kermit Cintron. In the seventh round, a big left from Martinez floored Cintron, who barely beat the count. Initially it appeared that the referee had counted the Puerto Rican out, and Martinez began to celebrate accordingly. However after several minutes had elapsed, it was decided that Cintron had indeed beaten the count, so the fight was allowed to continue.

In the twelfth, the referee instructed the ringside judges to take a point off Martinez’s scorecard for hitting the back of Cintron’s head. That deduction effectively cost Martinez the win, but regardless of the outcome, it was his most impressive performance in an American ring thus far. 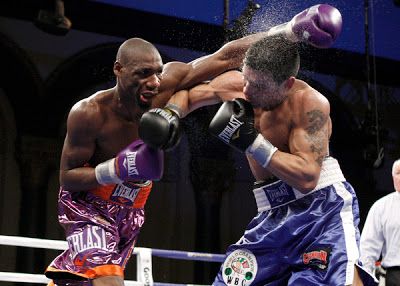 When Kelly Pavlik withdrew from his scheduled title defense against Paul Williams last December, citing a staff infection in his left hand, Martinez jumped at the chance to step in as a replacement. The resulting contest, which Martinez dedicated to the memory of Vernon Forest, was one of THE best fights of 2009. The pair exchanged first round knockdowns, and then waged war for twelve rounds. Martinez started and finished the stronger, with Williams dominating the middle rounds. The majority decision went in favor of the American, but many at ringside were convinced Martinez was robbed.

By now, the American public were sold on Martinez, and when he fought Pavlik for the WBC and WBO middleweight titles in April of this year, the American was only a slight betting favorite, with many experts, including this writer, favoring Martinez.

He didn’t disappoint. Capping what has been an extraordinary and unique late career surge, Martinez, hands down near his knees, fought a sensational fight against Pavlik, dominating the early rounds, giving ground in the middle stages when Pavlik came on strong, and then seizing control again to storm through the latter rounds and take a well deserved unanimous decision.

Handsome and charismatic, and with the speed, reflexes and energy level of a man fifteen years younger, 35 year old Martinez (45-2-2, 27 ko’s) is a genuine boxing superstar. Both he and Williams feature in The Ring Magazine’s list of the worlds top ten fighters, Williams at 5th and Martinez 6th.

Williams most recent outing in May of this year ended disappointingly when his opponent Kermit Cintron tumbled out of the ring in the fourth round and injured his neck, rendering him unable to continue. The fight had been a scrappy encounter, and Williams had been surprisingly unimpressive. After the scorecards were tallied, Williams was awarded a four round technical decision.

Both Williams and Martinez are so talented and likeable, and their first encounter was so evenly matched, it is extremely hard to pick a winner. Clearly I am not alone in my opinion; the bookies have both fighters at 20/23 (bet365)

However, if I had to choose one fighter, I would go for Martinez based on his prior performance against Pavlik and the wave of supreme confidence he must still be riding. This fight will pick up were the first one left off, but the extra weight will favour the Argentinian more than the beanpole Williams, and just as he did in their first encounter, Martinez will start and finish the stronger to take a very close, possibly even split, decision.