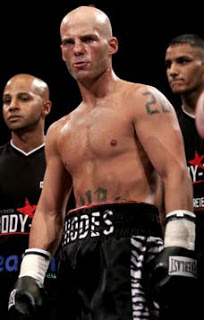 Sheffield´s ever popular Ryan Rhodes returns to the ring this Friday after a seven month layoff when he defends his European light middleweight title against Italian veteran Luca Messi at the Ponds Forge Arena in Sheffield.

The bout is this weeks featured contest on Sky Sport´s ‘Live Friday Fight Night’ and will be shown live from 10pm.

33 year old Rhodes (43-4, 29 ko´s) believes he is hitting the best form of his fifteen year career, and his most recent fight, last October´s thrilling seventh round knockout of European champion Jamie Moore – a contender for 2009 Domestic Fight of the Year – was testament to that.
That night Rhodes displayed the full spectrum of his abilities, smooth boxing, patience, durability, and when his chance arose, power punching and clinical finishing. Rhodes chin, once considered suspect, looked sound against the vicious punching Moore.

The victory fired Rhodes up the WBC rankings to 4th, yet surprisingly, Ryan has spent the last seven months since the Moore fight out of the ring. Now he´s back, in a bout promoted by Ricky Hatton, with whom Rhodes signed a promotional contract earlier this year.

At a news conference this week Ryan Rhodes spoke about the Moore fight, his layoff, and his hopes for the Messi bout and future fights.

“I really enjoyed the Jamie Moore fight.” said Rhodes. ”It was such a good fight, I enjoyed it so much despite it being one of the toughest fights of my career, that I wanted get straight back in the ring.”

“Due to situations outside the ring that hasn’t been the case but there is no point looking back and dwelling on it. We’re seven months down the line and Ricky Hatton is promoting the fight. It’s fantastic to have Ricky promoting me for this fight. He’s been there, seen it and done it. I’ve got no reason to doubt that Ricky can in the future maybe get me a world title fight.”

Rhodes spoke about his frustration during his seven month hiatus from the sport.

”I’ve been out of the ring too long now. Frustrating things behind the scenes. I want a world title shot. We’ll wait to see what weight (WBC champion) Sergio Martinez stays at.”

Argentinian Martinez currently holds both the the WBC light middleweight title and the WBC/WBA middleweight belts he won from Kelly Pavlik last month.

”WBC number one Julio Cesar Chavez Jr is now at middleweight. Number two is Antonio Margarito, that astounds me – he should have been banned for life!” (for the alleged Plaster-of-Paris inserts discovered in his hand wraps prior to his loss to Shane Mosley.)

”Then there was the Paul Williams-Kermit Cintron farce. I’m right up there. Number four with the WBC and IBF. And three in the Ring Magazine. I’ve never been in their ratings in my life! I must be one or two fights away from a world title shot.”

”I am treating this as though it’s my last contest. I haven’t seen much of Messi, but what I have seen – he comes forward and fights like he can really punch. I’m looking at him as dangerous. I must be 100%. I can’t look past Messi. I used to look past opponents – everyone said I was just like Naz (former three time world champion Naseem Hamed).”

Rhodes singled out one name in particular when speaking about those who had kept faith in him through the darker times.

”My trainer Dave Coldwell.” said Rhodes. ”He always knew my potential. Dave and my conditioner Mark Willey were at Brendan’s (Brendan Ingle, legendary trainer of Naseem Hamed, Errol Graham, Johnny Nelson, Rhodes and others) all those years ago. I still talk to Johnny Nelson, Naz, Kevin Adamson, Clifton Mitchell, and am good mates with Kell Brook (undefeated British welterweight champion and WBO no.1 contender) – who I watched growing up in Wincobank.”

Rhodes turned pro in 1995 aged just 18. Good looking, cocky and confident with an exciting boxer-puncher style that had pundits calling him the ”new Naz”, Rhodes was nicknamed ‘Spice Boy’ in reference to the Spice Girls who were dominating the music charts at the time.

Rhodes thinks the younger version of himself would be surprised at his longevity in the ring.

“Back then I probably didn’t think I’d still be fighting and on the verge of a world title at 33,” said Rhodes. “I thought I would have already won my world titles by now, without a doubt. It was just the experience. My first world title shot came in my 17th fight, I’d won the British title in my 11th fight. Everything happened early for me; probably a little bit too early.”

After the loss to Grant, Rhodes set about rebuilding his career, but suffered a shock two round knockout against Jason Mathews in July 1999. When Rhodes was stopped in three rounds by Lee Blundell in 2002, his career looked over.

But in one of the great comebacks in recent British boxing history, Rhodes has lost just once (a decision loss to Gary Lockett four years ago) in his last 19 fights, and has picked up the British light middleweight crown he first won eleven years earlier, plus the WBC International and European crowns, and is on the verge of a world title shot. Amazingly, Rhodes has still never been beaten at 154 lbs.

Looking back at his career, Rhodes has no regrets. Quite the opposite;

Standing in Rhodes route to a world title fight is the likable Luca Messi from Bergamo, Italy. A pro since 1998, Messi has won national titles at both welterweight and light middleweight.

In August 2005 he lost a decision to Mexican Alejandro Garcia in a WBA world light middleweight title fight. The following year he was knocked out in eleven rounds by fellow countryman Michele Piccirillo, himself a former IBF welterweight champion, in a European title fight.

Messi is unbeaten in his six fights since that loss, but to describe his opposition as moderate would be an understatement.

One of Messi´s cornermen on Friday will his brother Alessandro. Nothing particularly unusual about that, except Father Alessandro Messi is a priest in the Vatican.

“My brother is a priest and he’s in the team, working my corner. For me it is wonderful, to have my brother and Jesus in my corner,” said Messi.

“When I stand in the ring and look to my corner, for me it is good because I see my brother’s eyes and through them, seek help from God.”

He added: “If I win the title I will take it to show the Pope.

“I’ve given four belts to the Pope before, I stayed with him two years ago with Don King (yes, that Don King) and my brother at the Vatican. I gave a belt to him and a signed glove saying, ‘Please, Pope, pray for all of the boxers in the world’.”

Unless there is some divine intervention, Messi, with his straight ahead but light punching style, looks tailor-made for a sharpshooter like Rhodes. If Ryan were to come flying out of the blocks on Friday night, he could probably have Messi out by the third. But after a seven month layoff Rhodes might have a little ring rust, or may just wish to get a few rounds under his belt.

By the middle rounds Rhodes will be into his stride, and by the eighth Messi will be taking a beating.

Rhodes by TKO in eight.