Home Archive Rios looks more ”Pebbles” than ”Bam Bam” as he escapes with a... 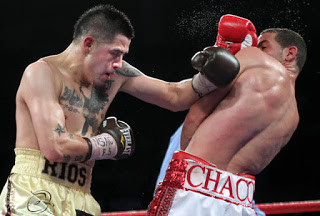 Brandon Rios looked mighty lucky to escape with his unbeaten record intact on Saturday night, winning a split decision over the unheralded Cuban Richard Abril on the Juan Manuel Marquez vs Serhiy Fedchenko undercard in Mexico.
The Oxnard slugger came into his bout against Abril a massive favorite, and if anything the matchup had been roundly criticized as being a potential mismatch. However 29 year old Abril (now 17-3-1 with 9 KOs) hadn’t quite read the script, and proceeded to bamboozle a flat looking Rios throughout the twelve round contest for the interim WBA lightweight title.

After twelve rounds judge Jerry Roth had it 116-112 for Rios, Glenn Trowbridge favored the former WBA lightweight champ 115-11, while Adalaide Byrd wasnt afraid to call it like he saw it and scored it for Abril by 117-111.

25 year old Rios (30-0-1, 22 KOs) had been scheduled to fight former WBA featherweight champion Yuriorkis Gamboa in a bout that ultimately fell through. He is still tentatively lined up for a fight Marquez on July 14 at the Cowboys Stadium in Arlington, Texas. Unless that fight is at light welterweight at least, Rios should stay well away. Attempting to make lightweight is damaging his potentially outstanding career.

Two days after the bout, the WBA announced that Abril would be allowed to keep his interim title, as Rios had weighed in two pounds over the lightweight limit.