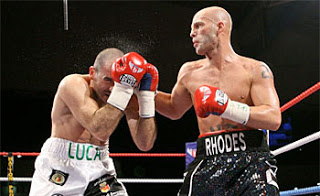 Ryan Rhodes made a successful first defence of his European light-middleweight title when he stopped Luca Messi in the sixth round in Sheffield.

The 33-year-old, enjoying an Indian summer to a glittering career, produced a performance of the highest order to shut out the durable Italian, who was on the back foot from the opening bell.

Messi was down three times in all as Rhodes’ power appeared to be too much for the 35-year-old to handle.

Rhodes dominated the first round from a southpaw stance, showing no signs of rustiness despite a seven-month absence since winning the title from Jamie Moore. read more