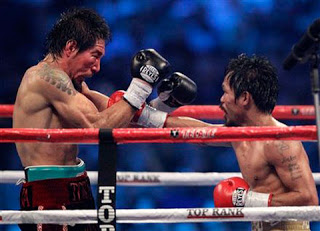 Manny Pacquiao has decided to relinquish the WBC super welterweight title it was announced today.

Pacquiao’s adviser Michael Koncz said that the Filipino legend, widely regarded as pound-for-pound the best boxer on the planet, reached his decision in response to a question from WBC president Jose Sulaiman asking the five-weight world champion whether he intended to defend the super welterweight belt or not.

Until today, Pacquiao had held both the WBC super welterweight title, and the WBO welterweight crown.
Sulaiman asked the question two months earlier, after Top Rank head honcho Bob Arum announced that Pacquiao’s next fight would be against Shane Mosley in a WBO title defense at the MGM Grand in Las Vegas on May 7. The Filipino, known the world over as ‘Pacman’, won the WBO version of the welterweight title with a sensational twelfth round TKO over Miguel Cotto in 2009.

The WBC super welterweight title became available when the then holder, Sergio Martinez of Argentina, defeated Kelly Pavlik to win the WBC middleweight title last April, and announced soon after that he would remain at 160 lbs.

Pacquiao won the vacant title by scoring a lopsided twelve round decision over Mexico’s Antonio Margarito at the Cowboys Stadium in Arlington, Texas last Nov. 13, but despite the one-sided scoreline, Pacquiao absorbed considerable punishment from the much bigger Margarito. Although the bout was set at a catch weight of 150 lbs, with Margarito weighing on the limit and Pacquiao scaling 144 at the official weigh in, by fight time Margarito held a full 17 pound weight advantage over his rival, which meant that inside the ring the 5’ 6’’ Pacquiao was still a welterweight, whilst the 5’ 11’’ Margarito was a super middleweight.

“We learned from experience in the Margarito fight that giving away 10 to 15 pounds during fight night is very detrimental to the safety of Manny.” said Koncz. “Because of those basic concerns we have no intention for Manny to fight at 154. From this day forward the maximum weight would be 147 lb.”
Koncz went on to say he would be sending a “thank you letter” stating how much they “appreciate what the WBC has done and that Manny wants to free the belt so that others have the opportunity to proudly wear the WBC belt.”