Home Archive Pacquiao v Mosley is a sell out!! 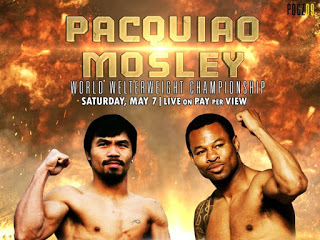 So much for Pacquiao v Mosley being an ‘outrageous dud’ that fight fans would boycott ‘en masse’!

The WBO welterweight title fight between holder Manny Pacquiao and former three-weight world champion Shane Mosley, scheduled for May 7th at the MGM Grand in Las Vegas had almost sold out just three hours after tickets went on sale yesterday, according to a Top Rank spokes person.
An estimated 16,000 tickets were sold between 10 a.m. and 1 p.m. PT, leaving barely 1,000 tickets available for the fight.
”Incredible, simply incredible,” the fight’s promoter Bob Arum said. ”I have never promoted a fight that has sold so many tickets so quickly. Manny Pacquiao never ceases to amaze the world with his achievements. The excitement he generated today with the initial ticket sales makes it feel like fight week already.”
There had been derision amongst many fight fans when Mosley was announced as Pacquiao’s next opponent two months ago ahead of undefeated WBC welterweight champion Andre Berto and WBA/WBO lightweight king Juan Manuel Marquez, the man who has already given Pacquiao the two toughest fights of his career so far.
Fans felt that 39 year old Mosley (46-6-1, 39 ko’s) did not deserve another big payday after ‘freezing’ in his May 2010 fight with Floyd Mayweather, and by all accounts looking like a shot fighter in a twelve round draw against Sergio Mora last September.
Tainted though he is, Mosley is still without doubt a ‘Marquee Fighter,’ a man who has won world titles at lightweight, welterweight and light middleweight, and has defeated the likes Oscar De La Hoya (twice), Fernando Vargas, Ricardo Mayorga and Antonio Margarito in his eighteen year career.
A slick, nimble boxer with knockout power in both fists, Mosley also possesses a great chin, and has never come close to being stopped. He genuinely hurt Mayweather with a huge right hand in the second round in their fight last year before tensing up, and as a result losing a disappointing, one-sided decision.
Last November Pacquiao (52-3-2, 38 ko’s) squared off with Mexican bad-boy Antonio Margarito in the Cowboy’s Stadium in Arlington, Texas for the vacant WBC light middleweight title in another fight that was criticized by experts and fans alike beforehand because of Margarito’s alleged use of plaster-of-Paris inserts in his hand wraps prior to his losing WBA welterweight title defence against Mosley in February 2009.
Ultimately, the fight was a thriller, with Pacquiao winning by a landslide on the judges scorecards and breaking Margarito’s nose and eye socket in the process, but having to absorb many heavy shots from the Mexican slugger along the way.
The 32 year old Filipino has entered the realms of such fistic icons as Jack Dempsey, Muhammad Ali, Sugar Ray Leonard and Mike Tyson, in that fans will turn out in droves to see him – the opponent is almost secondary.
That said, if Shane Mosley can bring even 70% of his A-game to the ring on May 7th, we should be in for a hell of a fight.