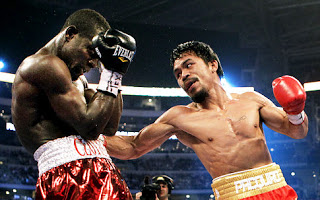 There was once a fighter, who despite being barely 5´6´´ tall and a world champion at both featherweight and lightweight – weight-classes way better suited to his small physique, chose to ply his trade at welterweight – where the purses – as well as the opponents were bigger.
In that division he also became a world champion, and despite frequently conceding every possible advantage in size to his opponents, went on to become arguably the greatest welterweight of all time.

His name was Henry Armstrong.

Last night, before 51,000 fans at the Cowboys Stadium is Arlington, Texas, another former featherweight and lightweight champion showed that maybe, in the not too distant future, Henry Armstrong, Sugar Ray Robinson and Sugar Ray Leonard´s positions as the three greatest welterweight boxers in history could be under threat.

Such was the quality of WBO welterweight champion Filipino superstar Manny Pacquiao´s performance against hard hitting, cement chinned former IBF champion Joshua Clottey that it is difficult to see anyone, in what is currently an outstanding welterweight division, having a prayer of a chance of beating him.

31 year old Pacquiao (51-3-2, 38 ko´s) entered the ring beaming. The warm smile across his face told the watching world; ”this is where I am happiest, and this is what I love to do more than anything else.” No malevolence, no hatred, no fury; just happiness. For his part, 32 year old Clottey (35-4, 20 ko´s) looked resolute, strong and confident.
At the bell, Clottey was clearly the bigger of the two. Officially, the Ghanaian had little more than a one pound weight advantage over Pacquiao, but unofficially it was doubtful that the PacMan had gained anything at all in terms of body weight since the weigh-in the day before, whereas Clottey by fight time might have struggled to make the 160 lb middleweight limit.
The pattern of the whole fight was dictated in the opening minute of the first round. Clottey took an immediate defensive stance, boxing behind his customary high guard peek-a-boo style defense. Pacquiao was up on his toes, dancing in and out, peppering Clottey with right jabs and straight lefts, plus hooks to the head and body from his southpaw stance.
Clottey barely ventured anything other than a few left jabs in the first two rounds. In the third he stung Pacquiao with a pair of straight rights, but he soon discovered that such insolence would not be tolerated by the Filipino, who hammered back with a volley of powerful shots whenever he was tagged. Clottey´s punches sounded heavy when they landed, but worryingly – despite their difference in size – Pacquiao´s shots sounded just as heavy, if not heavier, and there were an awful lot more of them.

Disgraced former WBO and WBA welterweight champion Antonio Margarito who holds wins over both Clottey and Miguel Cotto had said before the fight that he rated Clottey the bigger puncher of the two. The difference was that at the same stage of the fight, Cotto had been much more competitive than Clottey, showing far more aggression and throwing a lot more punches.

Pacquiao´s work rate was unbelievable. In the fifth he actually dropped his guard, as he had done against Cotto, lured Clottey into an attack, then punished him viciously afterward.

In the eighth a clash of heads caused a mouse under Pacquiao´s left eye. Moments later a Clottey low blow brought a break in the action but no warning from referee Rafael Ramos. Clottey was beginning to look tired and desperate.

Clottey´s trainer of choice – fellow Ghanaian Godwin Kotey had been refused a visa into the United States, and his role had been taken on by New Yorker Lenny DeJesus, a former cutman for Pacquiao. After the eighth, a furious DeJesus was heard shouting; ”We are losing every damn round. You are taking ten shots to land one!” at Clottey.

After Clottey absorbed another leather shampoo in the tenth, DeJesus yelled;

”The referee is going to stop it unless you throw more punches!”

Clottey´s predicament was that when he attempted to open up, he was duly punished. If Pacquiao´s work-rate in the first half of the fight was high, incredibly, he stepped it up in the second half. Every punch he threw was delivered with bad intentions, and without letup.

Surprisingly, when Clottey did throw a straight right, it invariably connected, although Pacquiao was never hurt. Pacquiao is no defensive master; the secret to his defense is attack. It is hard for his opponents to launch any kind of assault when they know in doing so they run the risk of being punished severely.

With the approach of the finish line, Clottey took slightly more risks in the eleventh and twelfth rounds – but not much. He was still being punished with 3, 4 and 5 punch combinations. The two embraced at the start of the twelfth, then Pacquiao went right back to the job at hand, only letting up in anticipation of the final bell.

After the fight, Pacquiao gave credit to Clottey;

”Clottey was not easy. He´s strong, he´s tough and he never looked hurt.”

When asked inevitably about the possibility of a showdown with Floyd Mayweather, he was almost non-committal;

”I want that fight because people want to see that fight” was all he would say.

Fans of Floyd Mayweather should know this; Mayweather is no longer in love with boxing and he may well lose his next fight against a fired up Shane Mosley.

He came back for the money, but he is in turmoil about fighting Manny Pacquiao because deep inside he knows it´s a fight he cannot possibly win. Defensive master that Mayweather is, that will not be enough against a man who throws more and more punches the further a fight goes on.

De La Hoya, Hatton, Cotto and Clottey all hit much harder than Mayweather. An ageing Oscar De La Hoya came within a whisper of beating him – before being thrashed by Pacquiao. The fight with Clottey proved that a resolute defense is not enough. A fight with Mayweather would be a cakewalk for the Filipino.

The biggest compliment Mayweather could have given Pacquiao was to accuse him of using performance enhancing drugs, and to insist on Olympic style random drug testing prior to their aborted fight. In doing that, Mayweather virtually admitted that when he watched Pacquiao destroy De La Hoya, Hatton and Cotto – what he saw scared him.

Every fighter worth his salt from lightweight to middleweight would love a crack at Pacquiao for the riches it would bring, and none would insist on Olympic style random drug testing – except Mayweather. To him, his unbeaten slate is more important than another 50 million dollars in the bank.

As a point of principle, Pacquiao will never stoop to Mayweather´s demands, and why should he? The result is a stalemate that is unlikely to waver.

Personally I believe that Manny Pacquiao is no more guilty of using performance enhancing drugs than Floyd Mayweather or even Oscar De La Hoya, both of whom began there careers as super-featherweight´s and climbed the divisions.

If he chooses to jump up to light-middleweight to challenge the winner of next months WBA title fight at Yankee Stadium between holder Yuri Foreman, a New York based Israeli and Miguel Cotto, the result would be box office dynamite.

But all that is for tomorrow. For now, Manny Pacquiao will have just one thing on his mind; bring on the karaoke!