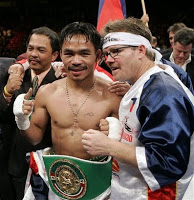 News coming out of Las Vegas this morning suggests that the proposed mega-fight between multi-weight world champions Manny Pacquiao and Floyd Mayweather may be off.
Reports are that Bob Arum has already approached new WBA light-middleweight champion Yuri Foreman of Israel, and former IBF light-welterweight champion New York´s Paulie Malignaggi as possible opponents to replace Mayweather and save the March 13th Las Vegas slot.

The Mayweather camp have demanded that Pacquiao take a blood test two days before the fight. The standard procedure in boxing is that fighters have to provide a urine sample immediately after a fight. Manny Pacquiao has never failed a drug test, and has been tested ten time in Nevada alone. That is not enough for Mayweather, who has persisted in accusing Pacquiao of using some kind of doping system. Mayweather’s father, Floyd Sr. claims he suspected Pacquiao was using performance-enhancing drugs after his win over Miguel Cotto for the WBO welterweight title last month. That fight was at 147 lbs. Pacquiao began his career as a 106lbs junior-flyweight.

“As management for Floyd, we’re insisting this Olympic-style, random testing take place to assure it’s a level field before the biggest fight in history,” Mayweather’s advisor Leonard Ellerbe said yesterday. “We’re definitely at an impasse. There is no fight without Olympic-style random drug testing,”

Initially the Mayweather camp claimed that Pacquiao had stated he would not submit to a blood test from thirty days before the fight on grounds of superstition, but Pacquiao´s trainer Freddie Roach said that Pacquiao was willing to submit to testing as long as it wasn’t intrusive to his preparations for the fight.

“I will not let my fighter take a blood test the day before a fight,”said Roach. “If they give me a five-day window or something like that I have no problem with it.”

Roach said he hoped the whole doping issue wasn’t brought up as a way for Mayweather to pull out of the fight.

“He’s looking for a back door out,” Roach said. “We’re eager to fight.”

Mayweather has had just one fight in the last two years, an unimpressive 12 round decision over blown up lightweight Juan Manuel Marquez. In the same time period, Pacquiao has fought six times. His last three fights have produced the best performances of his life, stopping Oscar De La Hoya, Ricky Hatton and Miguel Cotto.

“I knew Floyd wanted a way out of the fight,” said Roach.

The fight had looked set to break all box-office records, and both fighters were due to earn in excess of 25 million dollars each. It now appears that neither man has yet signed a contract.
But Mayweather´s promoter Richard Schaefer was confident the fight will still go ahead as scheduled.

“The good news is we have agreed on all the other points,” said Schaefer. “Depending on what Manny Pacquiao decides to do we either have a fight or we don’t have a fight. I am still hopeful because I really believe this decision didn’t come from Manny Pacquiao, it came from somebody else. It’s up to Manny Pacquiao to prove me right or wrong.”