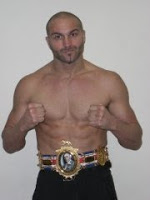 British and Commonwealth cruiserweight champion Rob Norton puts both his titles on the line when he goes toe to toe with dangerous challenger David Dolan at the Altrincham Leisure Center this Friday night.
The contest is an eagerly awaited rematch; 37 year old southpaw Norton (32-4, 19 ko´s) defeated Dolan by a unanimous decision for the vacant Commonwealth title in a five knockdown thriller last February. It was one of the best domestic title fights of 2009.
That fight saw Norton hit the deck three times, twice in the 4th and once in 8th, , while Dolan was knocked down in the 6th and 11th . The vastly more experienced Norton started and finished the stronger of the two, with Dolan having plenty of success in the middle rounds. Time and again Norton courted disaster by keeping his hands by his sides and inviting Dolan in. Norton has an awkward, ungainly southpaw style that effectively confuses his opponents. When he lets loose he is a dangerous puncher, and his southpaw right jab is a weapon. Dolan is a well schooled boxer who can bang. He had Norton in desperate trouble late in the fourth and again in the eighth, and both times the bell saved Norton from disaster.
Now in his seventeenth year as a pro, Rob Norton seems to have been around forever. Turning pro in 1993, he was undefeated in his first 17 fights (one draw) before losing on points to Belfast’s Darren Corbett for the Commonwealth cruiserweight title in 1997. Two wins later, Norton won the WBU cruiserweight crown from South African Jacob Mofokeng, but lost it in his first defense when he was TKO´d in eight rounds by another South African, Sebastiaan Rothmann in 1999. It remains Norton´s only stoppage loss to date.
Norton had only four bouts in the next four years. In 2003 he fought Huddersfield´s
6´5´´ Mark Hobson for the British and Commonwealth cruiserweight titles. Ring rusty and under-prepared, Norton was knocked down twice and lost a clear points decision. Since that setback, Norton has dedicated himself to his boxing career. He has won 9 of his last ten fights, and captured the British and Commonwealth cruiserweight titles in the process. The big puncher from Stourbridge finally won the British cruiserweight title by thrashing London´s Mickey Steeds in October 2008. That was a particularly sweet victory for Norton, who had been the no1 contender for the title for three years.
At 30, Sunderland born David Dolan (13-2, 5 ko´s) is seven years Norton´s junior. An outstanding amateur, Dolan is a three time British ABA heavyweight champion, winning in 2000, 2001 and 2002. An interesting footnote is that David´s brother Joe captured the ABA cruiserweight title in the same three years. Dolan then went on to capture the Gold medal at super-heavyweight in the 2002 Commonwealth games.
Dolan turned pro as a heavyweight, and after seven straight wins, he entered the first ever ´Prizefighter` tournament. The Prizefighter format calls for eight fighters to compete in four quarter-finals of 3 x 3 minute rounds, the winners go through to two semi-finals, and ultimately the final, all on the same night.
After two victories, Dolan lost in the final to future British Commonwealth heavyweight champion, Martin Rogan of Belfast. Although Dolan shook Rogan with some solid rights, he was on the deck in the first and third rounds. It was clear that Rogan was much too big and powerful for him.
Following that setback, Dolan decided to turn his attention to the cruiserweights. He has now fought four times at the weight, only losing to Norton.
His loss to Norton should be looked at as a learning curve for Dolan. If he has worked on a system to counter Norton´s awkward southpaw style, he is more than capable of going one step further than their first encounter and grabbing Norton´s belts. He came close first time round. He knows he can get to Norton, and he knows he can hurt him.
At 37 Norton is aware that this could be his last chance to put himself in the shop window. Herbie Hide has re-invented himself as a cruiserweight, and is ranked no2 in the world by the WBC. If Hide can be tempted to challenge Norton for his titles, it would be the Dudley puncher´s best chance for a big payday, plus an opportunity to gatecrash the world rankings.
Personally, I believe Norton´s eccentricities will be his undoing. Dolan will have to absorb some big shots and even climb off the canvas in what should be another thriller, but he has the skill and power to win on a late stoppage or points decision.
Big Fight Odds; Rob Norton 2/5, David Dolan 15/8 William Hill