Home Archive Nonito Donaire vs Guillermo Rigondeaux: Who Will Win The Battle Of The... 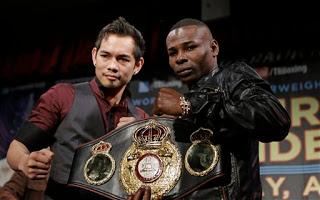 It hasn’t taken place yet, but already Donaire v Rigondeaux is a 2013 Fight of the Year candidate… potentially.
On paper at least one would be hard pressed to find a more intriguing, evenly balanced matchup than this one. Name another possible bout this year that will feature two highly skilled defending world champions that can both box sublimely and hit like jack-hammers?

That´s right; there isn’t one.

Okay, we’ve established that the Donaire v Rigondeaux fight should be pretty special, but as fight fans we have been disappointed before when a projected blockbuster has turned into a damp squib: David Haye v Wladimir Klitschko anyone?

So, could this fight go the same way?

CAN DONAIRE V RIGONDEAUX LIVE UP TO THE HYPE?

It will, if WBA champ Rigondeaux (11-0, 8 KOs) comes to fight. The 32 year old double Olympic gold medalist has the capacity to ´´stink out the joint“ if he wants to. Never mind Floyd Mayweather, Guillermo Rigondeaux can be literally impossible to hit if he feels the need to be. And if he realizes early in the bout that he is outgunned by Donaire, and that his own shots are not having the desired effect, he could go in to deep survival mode, and that will lead to a very boring night: think Donaire vs Omar Narvaez, only with less action!

However, this is unlikely to be the case. Truth is, Rigondeaux believes that he can stop WBO title holder Donaire (31-1, 20 KOs). The 29 year old Filipino focuses far more on offence than defense and can be hit, and Rigondeaux figures that anyone he can hit, he can KO.

This should result in some sensational exchanges, with both men likely to be hurt early. The recent barnburner between Tim Bradley and Ruslan Provodnikov, plus the sensational rematch between Mike Alvarado and Brandon Rios, not to mention the chilling KO of iron jawed Nobuhiro Ishida by the rampaging Gennady Golovkin cannot have failed to inspire other elite level professional fighters to put on great shows of their own. Both Donaire and Rigondeaux will be up for this bout, and eager to stake their claim amongst the best P4P fighters in the world.

DONAIRE… RIGONDEAUX… WHO IS THE MOST COMPLETE FIGHTER?

Although Rigondeaux has far less experience as a pro – especially at world title level – than Donaire, one cannot underestimate his talent and skill. Here is a man that boxed some 400 amateur fights against the best in the world, not to mention the countless thousands of rounds sparred in tough Cuban gyms against his nation’s best little men, all the while absorbing the knowledge bestowed upon him by some of the most wily old trainers in all of boxing. Don’t worry about Rigondeaux; he is as ready for this fight as he is ever gonna be!

Donaire has learnt his trade in the pro ring, but some of what he does could never be taught. Quite simply, the Filipino Flash is one of those rare fighters who is capable of making you believe that you are watching the greatest fighter of all time!

When he is at his best, boxing beautifully, effortlessly switching from southpaw to orthodox, generating freakish punching power with the most innocuous of shots, he is truly breathtaking. The late Emanuel Steward no less once said that Donaire was ´´the best he had ever seen.“

At other times, when faced with an opponent who won’t give him the openings he needs (Narvaez, for example), he can look almost ordinary.

In terms of skill, Rigondeaux shades it. On power, Donaire gets the nod. When it comes to sheer talent and natural God-given ability, it´s down to the toss of a coin. 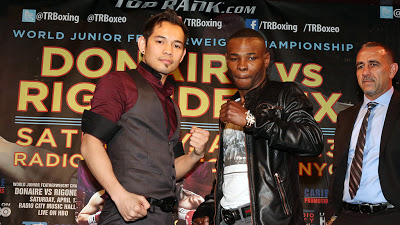 As I said in a previous article, this is the kind of fight where you go to bed at night convinced one guy will win, and come the morning, you like the other guy. But as the fight is now just hours away, it’s time to nail my colors to the mast.

A look into my boxing crystal ball tells me this will be a fight of two halves. Donaire will come out smoking, but will be open to Rigondeaux´s vicious counters. As a result, Donaire will be hurt seriously for the first time in his career. He will hit the deck early and will be rocked repeatedly. After six rounds, Rigondeaux will be ahead on points and winning the fight.

The second half of the bout will see Donaire slowly start to swing the momentum in his favor, as he mixes his attacks with sound boxing. His heavier punches will gradually start to take a toll on Rigondeaux, who´s face will begin to swell.

Donaire will still be behind on points when he launches the assault that finally breaks Rigondeaux´s resistance in the tenth round, sending him to the canvas for the count.

Donaire by KO in ten.