Home Archive Nonito Donaire vs Guillermo Rigondeaux – Who Wins The Most Anticipated Super... 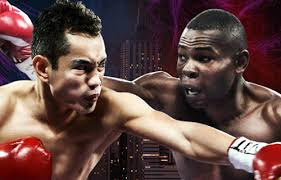 It is without doubt the most enticing matchup that the super bantamweight division has thrown up in many a year.
WBO title holder Nonito ”The Filipino Flash” Donaire, the heir apparent to countryman Manny Pacquiao’s old Pound-For-Pound crown and already a three weight world champion, against Guillermo ”The Jackal” Rigondeaux, one of the most highly decorated amateurs in history, a two-time Olympic Gold medalist and now WBA world super bantamweight champion as a pro.

Donaire has sublime switch-hitting skills and crushing punching power with either hand – Rigondeaux is virtually unhittable, has arguably the fastest hands in all of boxing, and is no mean hitter in his own right. When these two collide – something has got to give!

These two ring superstars have been calling each other out for a couple of years now, and it looks as if fight fans will see all of the hype and smack-talk come to fruition as the two are scheduled to meet at the Radio City Music Hall in New York on April 14. Worryingly, there have been murmurs of contractual and PED testing disputes from both camps, and as there have been a whole host of mooted fights that have failed to materialize recently (Gamboa v Rios for example), nothing is set in stone until the time keeper calls ”seconds out”, so let’s hope we do actually get to see these two warriors get it on in the ring.

Without doubt, 29 year old Donaire (32-1, 20 KOs) will start as favorite, and UK bookies Bet365 have installed him as a prohibitive 2/5 on to win. He is three years younger than the 32 year old Cuban, has far more experience as a professional, and also is the bigger man in the ring, with a couple of inches in height and reach over his rival. However, he will not have a HUGE a physical advantage as he has enjoyed in some of his other fights, especially when he was competing as a flyweight, where he would often look several weight divisions bigger than an opponent, and resemble an overgrown schoolyard bully picking on the little kid (check out the youtube video of his destruction of Volodymyr Sydorenko for just such an example!) 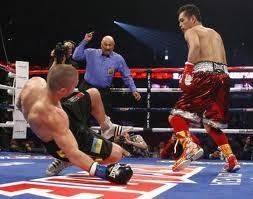 And although Donaire may have more experience in the pro game, Rigondeaux (11-0, 8 KOs) certainly knows how to box, and he has learnt a thing or two in his near 400 amateur bouts – the vast majority fought at elite international level.

The biggest factor in the Cuban’s favor is that Donaire can be hit. The Filipino likes to fight fast and loose, and he is usually so preoccupied with offence (and as a result his opponent is preoccupied with avoiding said offence) that defense is secondary, and as a result he is frequently tagged. As of yet Donaire has never looked badly hurt in the ring, and has never been floored in his twelve year career. He has faced proven punchers like Vic Darchinyan, Fernando Montiel and Jorge Arce and come through completely unscathed. Indeed, whenever Donaire has faced a puncher, he has produced his most dramatic and exciting KO wins. It is pure boxers like Omar Narvaez and Jeffrey Mathebula who have given Donaire his most frustrating nights.

Rigondeaux will offer Donaire the conundrum of being most likely both the most skillful boxer he will have yet fought, and also the hardest one-punch hitter. The Cuban may not be heavy-handed in the way someone like Vic Darchinyan is, but when he wants to hit, he genuinely has chilling ”lights-out” power, as Ireland’s Paul Casey can verify. ”Big Bang” had bulldozed his way past some of the best little men in Europe and was unbeaten when he faced Rigondeaux in 2010 for the interim WBA super bantamweight title. Although the underdog, the Irishman was expected to provide Rigondeaux with his toughest test and take the fight into the trenches if nothing else. Three knockdowns in the very first round, all from lightning quick shots delivered with pinpoint accuracy from the Cuban ended Casey’s challenge and showed to the world what a truly lethal fighter Rigondeaux is. 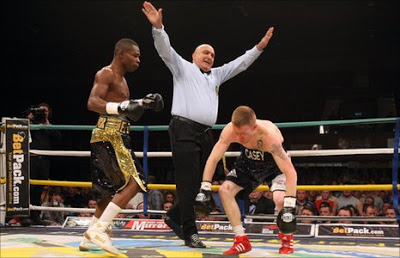 Donaire v Rigondeaux is an extremely tough fight to call – the kind of bout where you go to bed at night thinking one guy will clearly win, and you get up the next morning believing the other guy takes it. At first when the fight was made I thought Donaire would be victorious based on his size, experience and power, but now the more I look at the fight, the more I can see how Rigondeaux has the perfect style to be the Filipino’s worst nightmare.

I will make a definite prediction one way or the other a little closer to the fight, but in then mean time, let’s all hope and pray that greed, politics or whatever else does not raise its ugly head, and that this genuinely mouthwatering matchup goes ahead as planned!