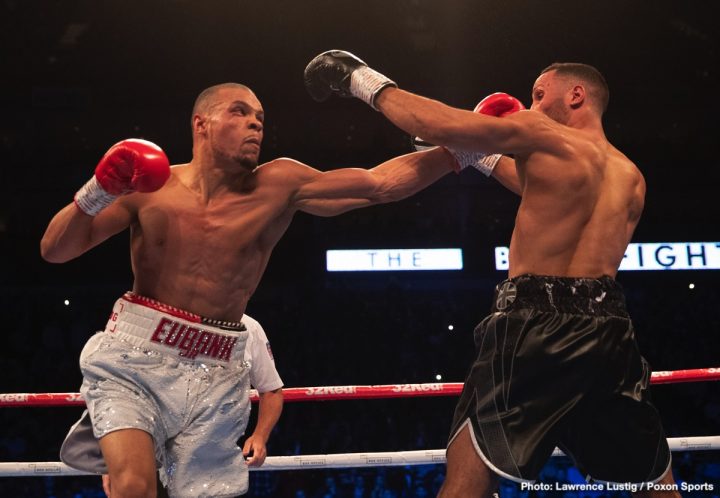 So Chris Eubank Jr finally got the win he needed to legitimize his boxing career. No matter what anyone says about him, or how history may ultimately judge him, on paper at least he was good enough to defeat a two-time world champion, a man who was a reigning world titlist until he vacated his belt three months ago.

His win over James DeGale was hardly a traditional boxing coming-of-age type of victory. Few pay-per-view fights in history would have delivered less action or more ugly clinches, missed haymakers, sloppy boxing and bad technique than DeGale vs Eubank Jr. Even the two knockdowns suffered by DeGale weren’t knockdowns in the classical sense, and at neither time did DeGale look on the verge being stopped.

DeGale fought as if he wanted it – his career in boxing – to be all over, while Eubank fought as he always does – like a super fit and feircly competive rank amatuer – which is what he basically is. Even with the employment of a full time trainer – Eubank Jr claiming it to be his first ever – his boxing was as basic as ever. What’s more, at 5′ 11″ he looked physically small next to the 33.year old DeGale (now 25-3, 15 KOs) , who isn’t a big super middleweight, and Chris will surely find himself dwarfed by the likes of Callum Smith, David Benavidez and Zurdo Ramirez, all of whom stands around 6 ft 3 in tall.

Realistically, he’s gone about as far as he can at 168 lbs, so let’s hope he has the right people informing him just that. Eubank Jr’s biggest problem may turn out to be his own bravery and his determination to prove that despite his “silver-spoon” privileged upbringing, he’s as tough and hungry as someone who began knife as an impoverished street urchin.

Against George Groves and now DeGale, Eubank (now 28-2, 21 KOs) was significantly the smaller man in the ring. It is therefore surely beneficial to drop back down to 160 lbs and be a good sized middleweight than stay at 168 lbs and be a small super-middleweight. Eubank Jr will be 30 next birthday, and doesn’t have huge amounts of time left to experiment.

A logical move would be to drop back down to middleweight to seek out a return fight with the man who handed him his first professional defeat, Billy Joe Saunders. Should he win that, the Holy Grail of a Canelo bout might be the reward, but we are getting way ahead of ourselves!

This Juggernaut Needs To Turn Off Cruise-Control

On the undercard, 33-year old Joe “The Juggernaut” Joyce went to 8-0 (all KOs) with a 6th round stoppage over former WBC heavyweight champion Bermane Stiverne. 2016 Rio Olympics super heavyweight silver medalist Joyce stands 6’6″ and carries his 265 lbs easily, he throws lots of punches and appears to have great stamina and a solid chin.

The downside is Joyce throws his punches as if he were at the bottom of a saltwater pool, i.e, in slow motion. Aso, all his shots carry the same amount of power- as in not much. He doesn’t seem to able to either ramp up the juice or add more weight to his shots, even when he has an opponent prone.

Big Joe clearly takes a good shot, but he needs to stop proving it. Stiverne actually landed the heavier punches during their fight, and while Joyce absorbed them comfortably, if he tries that with AJ or – heaven help us – Wilder, he will be suffering from a concussion and headaches for days after getting violently knocked out.

Big Joe seems like a lovely guy, but he needs to be matched with a mixture of caution and affection. He looks certainly capable of winning the British and European titles and a big fight against somebody like Tyson Fury would be the preferred, logical goal. He would lose every round, but would probably leave the ring with his health intact.

Let’s face it, with a few more learning bouts under his belt, Joyce will have the beating of 80% the world’s heavyweights. The concern is that fighters with serious power, plus speed and timing have the capacity to take advantage of Joe’s limitations and defeat him very badly, Therefore, while the likes of Big Baby Miller, Andy Ruiz and Joe Parker are fair game, the likes of Joshua, Wilder, Whyte, Ortiz and even rising KO artist Oscar Rivas should be avoided at all costs.