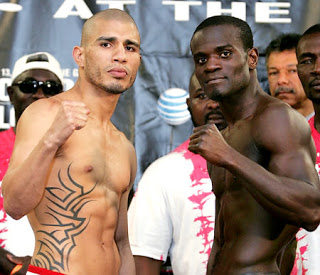 WBO welterweight champion Miguel Angel Cotto has the opportunity to put what had been a marquee career back on track when he takes on Ghana’s IBF champ Joshua Clottey in what should be a classic encounter at the venue of all venues, Madison Square Garden this Saturday.
Other fights this year have attracted more press and generated more money, but none have the genuine ´´throwback“ appeal of this match up between the classic pressure fighter in 28 year old Cotto (33 – 1, 27 ko´s) and the defensive counterpunching 32 year old Clottey (35-2, 20 ko´s).
Puerto Rican Cotto is hugely popular in New York, and the fight is a guaranteed 18,000 sellout. Both fighters have shown immense respect for each other in the build up for the fight. ´´Cotto is really giving me a big opportunity. I will always respect Miguel Cotto.“ said Clottey earlier this week. Cotto himself anticipates a tough battle.´´Like Joshua said before, he’s going to leave everything in the ring and I am going to do the same to be the winner and retain my title. But the real winner will be all of the fans.“
A look at Cotto´s record shows a 2008 stoppage defeat at the fists of Mexican Antonio Margarito. At the time, this was a shocking upset. Margarito appeared almost superhuman in his ability to walk through Cotto´s power punches and deliver a truly awful beating, ultimately battering Cotto into submission in the eleventh round.
Then earlier this year came the revelations after Margaritos subsequent defeat to Shane Mosely that the bandages used to wrap his hands had been dosed with plaster of Paris. Yes, you read that correctly. If Margarito had employed this tactic in the Cotto fight, and there is no real reason to assume he would have done otherwise, one shudders to think of the effect those punches must have had. Talk about fists of stone. Margarito is currently suspended and hopefully looking at jail time. What is Cotto´s only defeat should surely be changed to a no-contest.
Prior to this result, Cotto had posted impressive wins over the likes of Shane Mosely, Paulie Malignaggi and Zab Judah.
Clottey´s biggest victory came in his last fight, a technical decision over a badly cut Zab Judah. In truth the once mercurial Judah has been on the slide for some time, but Clottey was well in front and in control of a still dangerous opponent at the time of the referee’s decision. Prior to that, his record shows a victory over the late Diego Corrales, and a split decision loss to the aforesaid Margarito. Undoubtedly, Clottey has been avoided like the plague by many of the stellar names in the welterweight division. ´´All of the top welterweights never mention my name and Cotto has mentioned me for a long time. I respect that. He gave me the chance when others wouldn’t.“ said Clottey this week.
The only nagging doubt regarding Cotto is the potential permanent effect of such a crushing defeat as the one he sustained against Margarito. Indeed, Clottey himself said as much this week. “Yeah, I think so. I think so very, very much. I think if I go in there and beat him that he will have trouble getting back to the fight. I definitely think he won’t come to fight again,”
Personally I feel eventually that terrible night in 2008 will come back to haunt Cotto, but not this Saturday. One stoppage win in five years doesn’t show Joshua Clottey to be a destructive puncher, which Cotto undoubtedly is. And this lack of genuinely punching power will prove the difference. Cotto should win going away. Clottey doesn’t get hit too often, and has shown a sturdy chin, and he will need all his defensive skills against the relentless pressure of Cotto. By the middle rounds, Clottey will have no choice but to slip into survival mode, and the result should be a tough, hard fought but ultimately one sided decision for Cotto.
This is without doubt a golden time for the welterweight division, with more potentially exciting match-ups than any time since the divisions greatest ever era of the early1980´s, with Leonard, Duran, Hearns, Benitez and Cuevas going toe to toe.
Mayweather is returning, Pacquiao will move up, Mosely, amazingly, is still dangerous, Amir Khan should be holding a version of the title by next month, and Ricky Hatton, like it or not, is still huge box-office.
Expect Miguel Angel Cotto to be in the thick of the action for some time to come.
Fancy a flutter? Cotto is 1/3, Clottey 11/4, and a draw is 25/1.