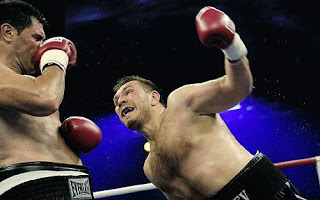 Ruslan Chagaev could be in line for a shot at David Haye’s WBA heavyweight crown after winning an elimination bout against Kali Meehan.
The Uzbek, who ended Nikolay Valuev’s first reign as WBA champion in 2007, scored a unanimous decision over the Australian veteran in Rostock, Germany.

He dominated against Meehan, 40, with the judges scoring 118-110, 117-111 and 117-112 in his favour.
Haye is keen to meet one of the Klitschko brothers in his next bout.
Vitali holds the WBC version of the world heavyweight title, while Wladimir is the reigning WBO and IBF champion.read more