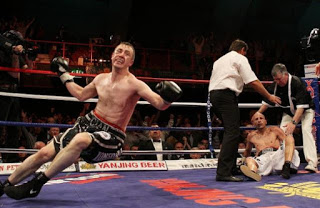 With stitches in his right eye, a wicked swelling and a bruised head Paul McCloskey reflected on a world class knockout but a performance that left him as bemused as anyone else.

Once a pure stylist, McCloskey morphed into a street fighter at the King’s Hall last night and it didn’t suit him.
Yes, he retained his European light-welterweight title with a spectacular, poison-tipped right hook which poleaxed Giuseppe Lauri after 35 seconds of the 11th round but up to that point the was shipping punches with shocking regularity. read more