Home Archive Mayweather wants to fight on the same night as Pacquiao! 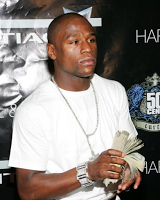 Floyd Mayweather Jr, that most shrinking of boxing violets, is looking to line up a fight on the same night as Manny Pacquiao´s March 13th WBO world title defense against Joshua Clottey.
Pacquiao and Mayweather were scheduled to go head to head in the ring on March 13th. Now the only thing they may go head to head over is PPV sales.
Pacquiao will defend his title at the Cowboys Stadium in Arlington Texas, home of the NFL´s Dallas Cowboys. The stadium has a capacity of 100,000, but will be set up to seat 50,000 for the fight, which will be expanded if ticket sales demand it.
Mayweather´s promoters Golden Boy are looking to put on a fight the same night at the MGM Grand in Las Vegas, site of the proposed Pacquiao v Mayweather megafight.
Golden Boy Promotions CEO Richard Shaefer said;
“It’s a date Golden Boy has had for a long time and nothing has changed. We have been talking to Team Mayweather to see who the opponent will be. I hope to have something to announce in the next few days.”
Negotations for the Pacquiao v Mayweather fight, potentially the highest grossing fight in boxing history, broke down last week due to disagreements over drug-testing protocol.
Bob Arum immediately set about finding a suitable replacement opponent for his fighter Pacquiao. Former IBF junior-welterweight champion Paulie Malignaggi and current WBA light-middleweight champion Uri Foreman were the initial frontrunners. But by Sunday, Joshua Clottey, the Armour tough Ghanaian who gave Miguel Cotto nightmares in a WBO title fight last year, had become the only contender.
32 year old Clottey (35-3, 20 ko´s) is a boxer-puncher with a cast iron jaw. He lost on a split decision to Cotto in June of last year in a fight that could have gone either way. He lost on a disqualification for persistent use of the head when comfortably in front on points against Carlos Baldomir in 1999. The only time an opponent has genuinely gotten the better of him was when Antonio Margarito beat him on points in a WBO welterweight title fight in 2006.
Pacquiao continues to choose dangerous opponents that make him raise his game as a fighter.
In marked contrast, most of the names that have been linked with Mayweather for his March 13th date have been distinctly underwhelming.
Paulie Malignaggi´s name was mentioned, as was Ricky Hatton´s brother Mathew.
37 year old former lightweight champion Nate Cambell, a Golden Boy stablemate of Mayweather´s is also in the frame.
A more interesting opponent that has been mentioned is hard hitting Puerto Rican Kermit Cintron. 30 year old Cintron (32-2, 28 ko´s) is a former IBF welterweight champion. He has only been beaten by Antonio Margarito (twice). At 5´11´´, he is a huge welterweight with genuine power who would be a real test for Mayweather.
But Floyd would most likely prefer to take the safer option and fight WBO light-welterweight champion Timothy Bradley, who stands just 5´6´´ and with a record of just 11 stoppages in 25 wins, is unlikely to test the Pretty Boy´s chin.
Big fight odds; Pacquiao 1/3, Clottey 9/4 bet365