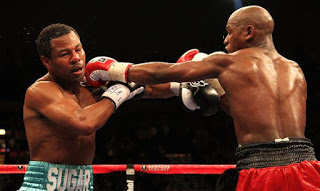 Floyd Mayweather Jr. throws a left to the head of Shane Mosley during the welterweight fight at the MGM Grand Garden Arena.

A 1-4 favourite going into the bout at the MGM Grand Garden Arena, Mayweather was stunned by a flurry of punishing blows from Mosley in the second round.

“I did what the fans came here to see,” Mayweather said. “I went toe-to-toe. That’s not my style but I wanted to give them that kind of fight and I knew I could do it.”
Related Links

Asked how he had recovered from Mosley’s early onslaught, Mayweather replied: “It’s a contact sport and you’re going to get hit. But when you get hit, you’ve got to suck it up and keep on fighting. And that’s what I did.”

Despite a confident start by Mayweather, Mosley responded in round two, landing several punishing blows with his right hand. Mayweather briefly buckled and was pinned against the ropes after Mosley switched his attack to a series of body jabs.

“I caught him with my big right hand and I tried to move around but he was too quick and I was too tight,” Mosley, 38, said. “After I landed the right hand, I thought I needed to knock him out but I needed to do it sooner than later. But I couldn’t adjust and he did.” read more