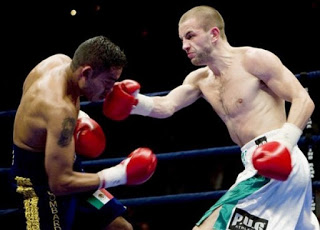 27 year old Lindsay (15-0, 6 ko´s) is making the first defense of the belt he won in dramatic fashion from the previously undefeated Paul Appleby in six rounds last April.

A graduate from the University of Ulster with a Bachelor of Science degree in Business Finance and Investments, 27 year old Lindsay had been likened in style to his fistic idol and fellow Irishman, former WBA featherweight champion Barry McGuigan.

Lindsay is currently ranked 6th by the IBF. If he comes through the Arthur fight unscathed, his promoter Frank Maloney wants him to box Ukrainian Oleg Yefimovic for the European title next. Lindsay is the EBU´s no.1 contender. If he were to beat the hard hitting Yefimovic, a world title shot against IBF champion Cristobal Cruz later this year could be a possibility.

The standout performance in Lindsay´s unbeaten career so far came last April with his title winning victory over Appleby.

The 21 year old Scot was undefeated in 14 fights, and regarded as a top young prospect. Appleby started brightly and shaded the first three rounds, but Lindsay caught up with him in the fourth, producing a sustained attack that shifted the tide of the fight. Lindsay stayed on the offensive through the fifth, and by the sixth – with Appleby on the back foot and taking heavy shots to the head – referee Dave Parris decided he had seen enough, stopping the fight and giving Lindsay the title.

Lindsay is the bookies clear favorite to win on Friday at 1/8, with Arthur a longshot at 9/2 (bet365). The bookies seldom get it wrong, but this time they may be selling challenger Arthur than a little short.

Under the promotional banner of Frank Warren, Jamie Arthur turned pro in March 2003, following Gold medal success in the lightweight class at the 2002 Commonwealth games games in Manchester. Within eighteen months he had put together nine straight wins – three inside the distance when disaster struck – twice.

Devastated and disillusioned, Arthur announced his retirement from boxing. He was just 25.

After taking almost three years away from the ring, Arthur made a cautious return to boxing in April 2008 with a six round points win against Ghanaian novice Ayittey Mettle. Arthur´s comeback quickly gained momentum, and after five straight wins he was matched with the hottest young fighter in the British featherweight division, Harrow´s Akaash Bhatia, in a British featherweight title eliminator.

In a contender for the domestic Fight of the Year for 2009, Arthur just shaded a ten round points decision over the previously unbeaten ”Kash the Bash.”

30 year old Arthur (16-2, 4 ko´s) originally from Aberdeen in Scotland but for many years a resident of Cwmbran, Wales, kept busy with a six round decision over Mickey Coveney last December.

”Beating Lindsay is all I’m thinking about. It won’t be easy because he’s undefeated and very talented but I’m so focused it’s unbelievable. I even woke myself up the other night because I threw a punch in my sleep. That’s how much I want this. The reason I came back was to win the British title and I think my challenge will be a helluva fight.”

Arthur explained how he was being pushed to the absolute limit by his trainer Steve ‘Sammy’ Sims;

”Sammy is working me like a mad man, but you won’t hear one complaint from me because it is for a reason,” said Arthur. “It is doing me the world of good and I have never, ever felt better going into a fight. Early every morning I am out doing hill running with Sammy revving me up from the comfort of his car. Early every afternoon I am in the gym and working 30 rounds some days. It is non-stop. In the evening I have my third session of the day when Darren Wilson comes in and fine tunes technical things. It is a hard, hard regime, but what I need to do if I am going to have my hand raised against Lindsay. All I am doing is thinking about Lindsay. I am even shadow boxing in my sleep. The fight is on my mind 24/7.”

Despite being the favorite, Lindsay should have his hands full with Arthur on Friday, who proved in his win over Bhatia that he is back in love with boxing, and has plenty left in the tank.

And I wouldn’t be at all surprised if it is the Welsh-Scotsman who has his hand raised after 12 tight rounds. Jamie Arthur to win on points.