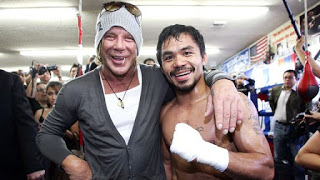 “He walked in; I had no idea who he was, I had never heard of him before,” Roach recalled recently. “His manager asked if I could work the mitts with him; they had heard I caught punches well. After one round, I went over to my people and said, ‘Wow. This kid can fight.’ And then he went over to his manager and said, ‘We have a new trainer.'”
If the encounter was not inherently unusual — boxers of all kinds walk in the doors of Roach’s Wild Card Boxing Club every day — it was almost immediately transformative. Roach had just met Manny Pacquiao, a man who, less than 10 minutes earlier, he didn’t even know existed but with whom, less than 10 years later, he would storm into the sport’s history books.
Pacquiao had already won two world titles when he arrived in Los Angeles in search of Roach, but with his new trainer in his corner, he would go on to win six more — the first of them within a matter of weeks, in their first fight together. It was an opportunity that might never have come had the fighter not been where he was, when he was.
IBF super bantamweight champion Lehlohonolo Ledwaba was scheduled to defend his title in the co-main event of Oscar De La Hoya’s challenge of junior middleweight strap holder Javier Castillejo, but when Ledwaba’s original opponent, Enrique Sanchez, pulled out, the South African needed a new dance partner.
“It was just timing. Everything worked out perfectly,” Roach said. “From my gym, he told me he was going to go to San Francisco, and then he was going home. But we hit it off in the gym, and so he stayed, and then the opportunity came up.” read more