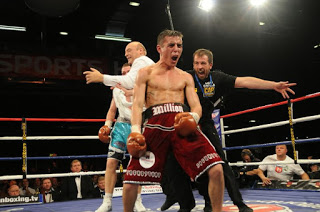 Manchester’s Anthony Crolla won the British lightweight title with a stunning ninth-round knockout of Liverpool’s John Watson at the Olympia in Merseyside on Saturday night.

24 year old Crolla (20-2, 8 ko’s) produced a sensational, career best performance, dominating the bookies favorite Watson throughout the fight before knocking him out with a picture-perfect right hand.
Crolla had stunned the taller Watson with the pace of his attack, and it wasn’t until the fifth round that the Manchester fighter had any measure of success.
Crolla rocked Watson with a huge uppercut in the sixth, and although Watson survived the round, already the writing was on the wall. Watson was incredibly game, but it was Crolla who was stealing the rounds with his skill and work-rate.
Crolla rocked Watson early in the ninth, and soon after, felled his man with tremendous right. The referee immediately waved the bout off.
It was doubly disappointing for the 27 year old Watson (13-2, 5 ko’s) who lost for the second straight time in fights for the vacant British lightweight title.
Last November Watson was TKO’d in eleven rounds by former WBA light welterweight champion Gavin Rees. Rees and Watson were originally due to fight a rematch on Saturday, but the Welshman withdrew two weeks ago because of a nose injury that needed surgery.
“I’m so, so happy” said an ecstatic Crolla after the fight. “I’ve wanted a Lonsdale belt ever since I got into boxing.”