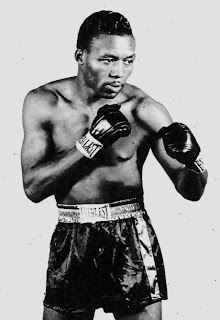 Sometimes greatness is obvious. It explodes out of the gate, often with a particular look and feel to it while other times the ascent of a great fighter in the making is more gradual, punctuated by moments that over time reveal something special.

But other times greatness shows up in disguise, arriving before it is recognized and missed when it is gone. Where prizefighting is concerned, the less obvious sort of greatness can sometimes kick-in for a fighter after years of setback and disappointment, the end result the finished product of lessons learned at the school of hard knocks, and for a time such a fighter bears little to no resemblance to the struggling pugilist he once was. Such was the career of former World lightweight champ Joe ‘Old Bones’ Brown, an example of unlikely and unexpected ring greatness.

Joe Brown was born into poverty on May 18th 1926 in New Orleans. His formative years were spent in Baton Rouge, Louisiana after his family relocated with the hope of a better life. Like his father, Joe became involved in the carpentry trade, learning the value of hard work at a young age. It was during this period that he took up another trade, a pursuit that would change the direction of his life and ultimately ensure sports immortality; prizefighting.

Despite limited gym time and virtually no amateur experience, Brown had his first professional fight on Friday December 5th 1941 at just over 16 years of age, a start that would be lost in the hoopla of December 7th, just a few days later as Japan attacked Pearl Harbor, marking the United States entry into World War II. Weighing just slightly under the lightweight division limit and up against a 2-0 fighter named John L Robertson of New Orleans, Brown’s introduction to prizefighting was the first in a series of painful lessons as he was stopped in the 1st round. The period after this initial contest to the point where Brown was called up for wartime service in 1943 is somewhat unclear and open to a degree of conjecture. For years it was generally believed Brown did not resume boxing after that initial bout until his stint with the U.S. Navy had ended, a period where he honed his skills in the Pacific, but over the last several years various old New Orleans Times newspaper reports have surfaced which indicate he continued to pursue his career up until the point he entered the service, suggestive that he was in fact an experienced 8-3, 3 KO’s with 1 no-contest at the time he joined the war effort.

After the war, Brown resumed his career with a series of bouts in New Orleans, his first two returns, a 3rd round knockout loss followed by a unanimous decision loss. Undaunted, he spent 1946 learning his trade, going to the post ten times that year, going 7-2-1 with 1KO, with the 6-round draw suffered against former conqueror Leonard Caesar, an experienced pug he shared the ring with on six occasions during the early part of his career. The next few years were spent entertaining crowds as Brown paid his dues, providing a glimpse of the fighter he would one day become winning a ten-round decision over future lightweight champion Jimmy Carter before being stopped in the 2nd round of his next bout by a heavy barrage of vicious body blows from Hall of Fame featherweight Sandy Saddler, who at the time of their contest was a well traveled 62-4-1.

Looking to correct the hot and cold reality of his 68-19-9 career and ranking in 1955, ‘Old Bones’ began working with Bill Gore, a noted veteran trainer brought in to tune his technique. Perceived as a good defensive fighter with little power, there was an almost immediate improvement in ‘Old Bones’ game as he began to rack up knockout wins, many times in consecutive fights. A wide 10-round unanimous decision win over reigning lightweight champion Wallace ‘Bud’ Smith in a non-title bout served as a breakthrough moment, setting the stage for a title-making rematch. 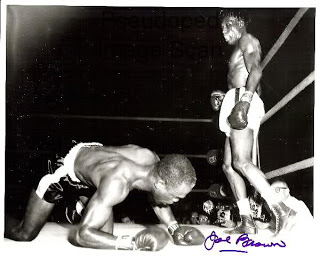 On August 24th 1956 at the New Orleans Municipal Arena, ‘Old Bones’ thrilled the crowd in attendance by starting quickly, aggressively attacking Smith with both hands in the 1st round. Having suffered a broken hand in the 2nd, Brown tapped his considerable experience to outbox his opponent for much of the contest. Badly hurt in the 12th, he ignored the pain and growing sense of fatigue to again attack Smith in the championship rounds, finding the mark in round 14 where he floored the defending champion, barely holding onto his lead by resourcefully boxing into the 15th and final round. Almost 14 years after setting out on a professional career, and with a record of 74-19-9, ‘Old Bones’ reached the pinnacle of a long and bumpy upward climb, winning a split decision and along with it the World lightweight championship.

Over the next six years Brown would successfully defend the World lightweight title eleven times. Mixed among those defenses were a series of stay-busy tune-ups and exhibition ten-round bouts where he amassed a record of 12-2-2 with 6KO’s. As the defending champion, he knocked-out Wallace ‘Bud’ Smith in the 11th round of their rubber match, twice stopped Ralph Dupas, the future WBA World /WBC light middleweight champion and gutted it out to squeak past the tough and crafty contender Kenny Lane with a close 15-round unanimous decision, among others. In 1961Ring Magazine named his spirited 15-round unanimous decision victory over England’s Dave Charnely at Earls Court Arena in London as “Fight of the Year’

On April 21, 1962, fate conspired with Father Time as ‘Old Bones’ looked his age in front of a sell-out crowd at the Convention Center, Las Vegas, Nevada, losing his World lightweight title at the age of 35 years 11 months to former World light welterweight champion and Hall of Famer Carlos Ortiz by a wide 15-round unanimous decision. Much younger and quicker, Ortiz was able to easily keep ‘Old Bones’ at bay and from mounting any semblance of a sustained effective attack. Four months later in his return, Brown lost a 10-round decision to Luis Molina, a result that cost him a shot at Ortiz in a rematch, thus he never again challenged for the title. Incredibly, he continued on with his career for eight years after the magic carpet ride was over, going a dismal 20-24-2 as a journeyman, fighting in remote venues such as South Africa and South America before retiring for good in 1970 at age 44.

Consider the sputtered start Brown had as a fighter, suffering a 1st round knockout loss. Modern marquee names such as former WBA heavyweight champion Mike Weaver had a similar initial venture into the squared circle, losing his first ring assignment via 3rd round stoppage. More recent examples would be the celebrated Juan Manuel Marquez, who lost his initial bout by 1st round disqualification and two-division champion, sure fire future Hall of Fame inductee Bernard ‘The Executioner’ Hopkins, who was outfought in his first professional bout, by four round majority decision. Greatness doesn’t always look explosive or dominant out of the gate or even along the way. Sometimes it bleeds through over time. In the case of Joe ‘Old Bones’ Brown, it sort of all came together suddenly, hitting his stride after a long career as a fringe contender, and once on that mountaintop he looked as though he had always belonged.

When his championship run finally ended, it came at the hands of another celebrated Hall of Fame fighter, and when the best of his skills and youth had abandoned him, it was as if all of it were a dream; as though he had never blossomed into a great the first place. England’s celebrated former heavyweight contender, Sir Henry Cooper once said of  ‘Old Bones’ “there was little pride left in his later performances as he tried to compensate for all of the hungry years when he was forced to fight for peanuts”. Later, after his fighting career had ended, Brown trained fighters for a number of years in New Orleans. He passed away on December 4th 1997 at age 71. He was inducted into the International Boxing Hall of Fame in 1996. His career stands at 116-47-13 with 53 KO’s.