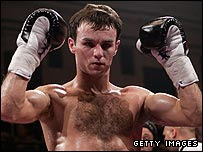 Superstar in waiting Kevin Mitchell marks time as he waits for a world title shot with a twelve rounder against Spanish based Colombian Ignacio Mendoza in the chief supporting bout on the Cleverly v Brancalion bill at Wembley Arena this Saturday night.

Mitchell defeated fearsome Colombian slugger Breidis Prescott in his last fight in what was the standout performance by a British fighter in 2009. One year earlier, Prescott had demolished Britain’s current WBA light-welterweight champion Amir Khan in just 54 seconds.

26 year old Mendoza (27-5-2, 18 ko´s), a pro since April 2002 has fought the majority of his fights in Spain. Although Boxrec.com rates him as Colombia´s best super-featherweight, many of Mendoza´s bouts have been 6 and 8 rounders against moderate Spanish opposition.

By the far the biggest name on the Colombian´s record is Manchester´s undefeated John Murray who Mendoza lost to by a technical decision in 2005 in a bout for the WBC Youth World lightweight title.

After winning his first ten fights, Mendoza suffered a rude awakening when he was flattened in three rounds by the very capable Armenian Leva Kirakosyan.

A subsequent nine fight unbeaten run ended with a points loss to Italian Ivan Fiorletta for something called the IBF Mediterranean super-featherweight championship.

Mendoza is yet to claim a major scalp as a pro. He has twice fought the decent Spanish based Russian Petr Petrov, but only emerged with a draw and a points defeat.

An interesting sideline is that Mendoza was flattened in three rounds in April 2008 by Venezuelan journeyman Pedro Verdu. Verdu´s record had stood at an unimpressive 8-8-2, before he went on a five bout winning streak that included the scalp of Mendoza. That streak was brought to an end in May of 2009 by – guess who? That´s right, Iganacio Mendoza, who knocked out Verdu in six rounds.

At just 26, he is only one year older than Mitchell, and he will be looking at this fight as his golden opportunity. His two knockout defeat´s were against genuine punchers, so Mitchell cant expect him to collapse at the first sign of aggression.

But Mitchell showed just what a master tactician he has become when he negated Prescott´s crunching power, and even taunted the Colombian in the later rounds. One would think he is too close to his dream of a world title to throw it all away at this stage stage of his career, but stranger things have happened.

Mitchell is due to fight the WBO´s interim champion Aussie Michael Katsidis for what may well be the vacant world title later this year.

Look for Mitchell to force a stoppage in the later rounds or settle for a comfortable decision.