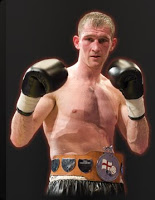 British light-welterweight champion Lenny “Lightning” Daws puts his title and his aspirations of European and World title fights on the line against dangerous puncher Jason Cook at the York Hall in Bethnal Green this Friday night.

The contest is the featured fight on Sky TV´s Friday Night Fight. Cook resurrected his career after a four year ring layoff by getting to the semi-final of last years light-welterweight edition of Sky TV´s Prizefighter competition. Cook was outpointed over three rounds by eventual winner and former WBA light-welterweight champion Gavin Rees.

At first glance, the Daws v Cook fight looks to be something of a mismatch. The bookies have Daws a strong 1/7 favorite, with Cook a 4/1 underdog. The bookies seldom get it wrong, but Cook brings with him a potential equalizer to the equation; he posses concussive punching power in his left hand.

Daws (20-1, 8 ko´s), from Mordem in London, is an impressive fighting machine. At 31, he has been a pro since 2003. A well schooled boxing technician with a strong chin in the mold of Joe Calzaghe, Daws work ethic is second to none. He sets a ferocious pace in the ring, throwing barrages of punches from behind a high defense, and will stay at that pace all night. The only negative against Lenny is that he lacks genuine power. Had he had a knockout punch, he may well have won a world title by now.

After 14 straight victories, Daws defeated the highly capable Nigel Wright for the British light-welterweight title in May 2006. Wright had won the crown six months earlier by knocking out Scotland’s beloved Kevin McIntyre in one round.

Surprisingly, Daws lost his title in first defense just six months later against another Scott, Barry Morrison on a twelve round split decision after a brutal encounter.

Daws wasted no time getting his career back on track and after five wins and a draw against old rival Nigel Wright, he met Morrison again in September of last year for the vacant British title. Morrison took the fight at a weeks notice after Daws´ original opponent Ajose Olusegun withdrew to pursue a world title shot (Olusegun is currently ranked no.2 by the WBC.)

Once again, the result was a peer six brawl, but this time Morrison´s lack of preparation told and Daws came on strong to TK´O the Scott in the tenth.

Daws is currently ranked 11th at light-welterweight by the EBU. Normally, he would be rated higher, but the light-welterweight division is ultra competitive at every level, and the EBU top ten is heavy with talent and includes names like Hatton, Witter, Kotelnik and Rees, all former world champions. Ulster´s unbeaten Paul McCloskey is the current champion, and he has a mandatory defense against Italian Giuseppe Lauri lined up.

On current form, if Daws can be matched with any of these fighters, he would stand an excellent chance of breaking into the world rankings in 2010. But all that could be academic if Daws were to come unstuck against Cook.

34 year old Jason Cook is a former ABA featherweight champion who won a silver medal at the 1994 Commonwealth Games for Wales. He turned pro in 1996, and won his first five bouts before suffering a shock first round knockout at the hands of Trevor Smith. He bounced back to go unbeaten for six years, and win the European lightweight title in the process.

His August 2002 victory over Sandro Casamonica for the European lightweight title in Calabria, Italy, showed Cook at his most dangerous. Casamonica floored Cook heavily in the third, Cook arose, but looked in trouble. Casamonica moved in for the kill but Cook caught him with one left hook that poleaxed the Italian.

After two successful defenses of his European crown, Cook won a version of the world lightweight title, albeit the IBO version, with a seventh round TKO over Argentinian Ariel Mariano Olveira. He successfully defended his IBO crown against future Commonwealth champion Kevin Bennett, before losing his crown to world ranked Argentinian Aldo Nazareno Rios in just three rounds. The South American was known as a tough, durable customer who had only been stopped by Ricky Hatton in his career, but wasn’t rated as a puncher.

The Rios defeat took the momentum out of Cook´s career. After a disqualification win over trial horse Gary Reid, Cook announced his retirement at just 29.

“It’s time for me to go now” said Cook at the time.

“I’ve had so much trouble with the shoulder over the years and tendonitis in an ankle which flares up when I do roadwork that I can’t carry on at the top level. If I was going to fight four, or six-rounders, it might be OK, but life as a journeyman is not for me.”

It appears that four years out of the ring may have helped with Cook´s injuries. His first fight back saw him weigh in a career high 150 lbs.

Against semi-novice Scott Jordan, Cook looked ragged and rusty. Jordan boxed aggressively, and for a moment it looked like an upset might be on the cards, until a Hail-Mary of a left hook flattened Jordan in the fourth round, reminiscent of the punch against Casamonica in 2002 that won Cook the European title.

Cook (26-3, 13 ko´s) got his weight down to the junior-welterweight limit and entered Prizefighter, the Sky TV boxing tournament that pits eight fighters in a quarter-final lineup, with the four winners going through to the semi´s, and the two winners competing in the final, all fights over three rounds and all fights taking place on the same night.

In his quarter-final fight, Cook defeated the second favorite for the title, previously undefeated Michael Grant on a third round TKO. He lost his semi-final against former WBA champion and eventual competition winner Gavin Rees.

Although both bouts were only three rounders, it still equated to six rounds of boxing at a strong domestic level.

Will it be enough to overcome a resolute professional like Lenny Daws? It would seem unlikely.

The most likely outcome is Daws by a TKO around the 6th round,

but if Cook were to catch Daws just so with that left hook of his, it could be