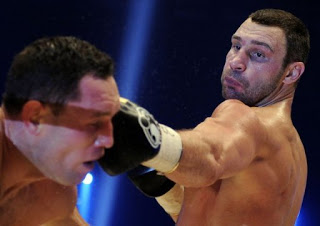 WBC heavyweight champion Vitali Klitschko stopped a brave Albert Sosnowski in the tenth round on Saturday night before 60,000 fans at the Veltins Arena in Gelsenkirhen, Germany. Sosnowski had been taking heavy punishment for several rounds when a huge right floored him at 2:30 of the tenth. Referee Jay Nady chose to immediately stop the fight rather than give Sosnowski a count.

31 year old Essex based Pole Sosnowski (45-3-1, 27 ko´s) surprised many experts who had predicted an early ending by making a fight of it and showing much more aggression than Klitschko´s last opponent American Kevin Johnson who looked scared stiff in their fight last December and employed safety-first tactics to survive twelve rounds.

For the 38 year old Klitschko (40-2, 38 ko´s) it was his fifth win since returning to the ring in October 2008 following a four year injury enforced layoff. The 6’8” Ukrainian spoke before and after the fight about a meeting later this year with
Britain´s David Haye, the WBA champion.

”David Haye understands that a fight against one of the Klitschko brothers will be the end of his career. I promise David Haye that a fight with me will be much shorter than one with my brother, because Vladimir will beat him badly for all 12 rounds and then knock him out.”

”I give proposal to David Haye. I will make it easier for him. I will knock him out in three, maximum four rounds. The fight against Klitschko will mean the end of his career. It’s why he tries to use every excuse to jump away.”

Klitschko turns 39 in six weeks time, but worryingly for David Haye at the rest of the heavyweight division, he still looks a formidable prospect.