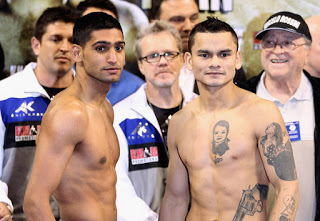 Bolton’s Amir Khan puts his WBA light welterweight title on the line for the third time against the very dangerous no.1 contender, Marcos Rene Maidana of Argentina at the Mandalay Bay Casino in Las Vegas on Saturday night.

Maidana has knocked out 27 of 29 victims, and is considered the hardest puncher in the division. The fight is part of Sky TV’s GR8 BRITAIN VERSUS THE WORLD package of eight title bouts. Live action begins at 8pm Saturday night on Sky Box Office.

Khan (24-1, 17 ko’s) looked sensational in his last fight in May of this year, dominating former IBF light welterweight champion Paulie Malignaggi over eleven one sided rounds. Khan showed his customary lightning hand speed and punching power, but it was tempered with a patience and coolness that wasn’t evident in Khan prior to teaming up with trainer Freddie Roach.
Roach, trainer of Manny Pacquiao and widely regarded as the finest in the business, took over coaching Khan following his devastating knockout loss to Colombian Breidis Prescott in 2009. Khan has improved dramatically in successive fights under Roach’s tutelage, and against Malignaggi he looked the total package.

24 year old Khan’s story is well known to most: Olympic Silver medalist at the 2004 Athens Olympics when he was just seventeen, Khan turned pro under the management of Frank Warren in 2005, and made rapid progress.
Immensely personable, clean cut and good looking, Khan instantly became a UK crossover sporting figure alongside the likes of footballer Wayne Rooney and racing driver Lewis Hamilton. In the ring he didn’t disappoint, throwing vicious combinations with lightning speed, and scoring sensational wins over the likes of Scott Lawton, Michael Gomez and Graham Earl, whom Khan blitzed in just 72 seconds.
He could be caught too, and hit the canvass against Rachid Drilzane, Willie Limond and Gomez, though always rising to deliver the knockout.
Khan’s chin was clearly not bulletproof, and there was a worry in some quarters that Khan’s defence was not improving at the same rate as the opposition was getting tougher.

Khan’s world came crashing down in September 2008 when he fought fellow unbeaten prospect Breidis Prescott. The Colombian, an established knockout artist with 17 knockouts in 19 fights, caught Khan early on with a vicious left hook to the temple, and from that moment the fight was effectively over.

A powerful blow to the temple scrambles the equilibrium and makes it virtually impossible to carry on in a fight. Witness the normally durable Trevor Berbick break-dancing across the ring in the second round of his 1986 title bout with Mike Tyson, courtesy of a thunderous left hook to the temple delivered seconds earlier by Iron Mike.

A follow up left hook dropped Khan heavily, but he proved his immense bravery by getting up, and although still badly stunned and wobbly legged, attempted to fight on. Prescott couldn’t miss, and a third left hook put him down for the count. The time was just 54 seconds.

Following the Prescott disaster, Khan’s future as a fighter was written off by many journalists, fighters and fans alike. Khan himself had no doubt that it was nothing more than a ”bad day at the office” and that he would bounce back.
His promoter Frank Warren kept faith in his young charge, sacking Khan’s trainer Jorge Rubio and replacing him with the best in the business – Freddie Roach.

After a confidence building return to the ring against Oisin Fagan, Khan was matched with fading ring legend Marco Antonio Barrera in March 2009. The 34 year old Mexican had built his reputation at bantamweight and featherweight and had never previously fought at lightweight, but was was still considered a dangerous opponent.

Khan showed great respect for the six time world champion Barrera outside of the ring, but none in it, hammering the Mexican for four one-sided rounds before a bad gash on Barrera’s forehead saved him from the ignominy of a certain knockout defeat. Khan had reestablished himself as a lightweight contender, but a world title opportunity would come sooner than expected, and at light welterweight.

Frank Warren convinced German based Ukrainian Andriy Kotelnik to put his WBA 140lb belt on the line for a big payday at Manchester’s M.E.N Arena in July 2009. Kotelnik was making the third defense of the title he had taken from Welshman Gavin Rees in March 2008. In his previous fight, Kotelnik had become the first man to defeat an Argentinian knockout sensation named Marcos Rene Maidana, doing so via a razor thin split decision in Germany.

Kotelnik was renowned as a solid if unspectacular ring technician, a sound boxer with decent power, inherently tough, and possessing a cast iron jaw.
Warren knew it was a winnable fight for his man, and indeed it proved to be, although Khan was at his least exciting, boxing behind his guard and keeping a tight defence to win the title via a one sided unanimous decision.

In his his first title defense four months later, Khan blew away the over-matched Dmitriy Salita in just 76 seconds. The win over a fighter who in reality should not have had a world ranking, never mind be the WBA’s mandatory challenger, earned Khan plenty of positive press attention. Suddenly it was as if the Prescott fight had never happened.

At the time of the announcement, this writer thought Malignaggi was a terrible choice of opponent for Khan. The Brooklynite is renowned as a cocky, brash spoiler with quick hands and an ever quicker mouth, and with the ability to make anyone look bad.
Deceptively tough and brave, the light punching Malignaggi had held the IBF belt from 2007- 2008. He had twice beaten South African hard man Lovemore N’dou, and gone the distance with a peak form Miguel Cotto in 2006.

Malignaggi had bounced back well after a bad 11th round TKO defeat to Ricky Hatton in November 2008 with two fights against former WBO/WBA/IBF lightweight champion Juan Diaz, losing the first and winning the second of two exciting encounters.

Malignaggi was world class, but the jury was still out on Khan. How would he deal with an unconventional opponent, a defensive wizard who could make him look amateurish?
The answer was masterfully. Khan came of age against Malignaggi with a performance that made believers out of doubters.
Having defended his crown against the purest boxer in the division, he now takes on its roughest slugger; Marcos Rene ”El Chino” Maidana.

Born in Santa Fe, Argentina 27 years ago, Maidana (29-1, 27 ko’s) began boxing at the age of 15, and was a two-time Argentinian amateur champion in 2002 and 2003, compiling an impressive ledger of 84-4.
Maidana turned pro in 2004, and soon established a reputation in Buenos Aires, flattening six of his first seven opponents in the first round.

Initially Maidana boxed exclusively in Argentina, but from 2007 began to fight regularly in Germany. By the time he fought Kotelnik for the WBA light welterweight title, he had compiled a record of 25 straight wins with 24 knockouts against moderate opposition. Respectful of his opponent’s reputation for durability, Maidana elected to box against Kotelnik, and almost did enough to take the title, going down on a split decision.

American sensation ”Vicious” Victor Ortiz and his promoter Oscar De La Hoya must have liked what they saw when they watched Maidana v Kotelnik, because they
signed to fight the Argentinian in Los Angeles in June 2009.
In a vicious fight that saw neither man attempt to box, both fighters hit the deck in the first, then Ortiz floored Maidana twice more in the second and had him on the verge of a knockout. Ortiz looked the likely winner until Maidana turned it all around in the sixth, smashing home a series of right hand bombs, flooring Ortiz and forcing him to quit. Maidana was back with a bang!

In March of this year, Maidana stopped previously unbeaten Victor Cayo of the Dominican Republic with a body shot in the sixth. It was a see-saw encounter against a tricky, switch hitting opponent who could hit. Once again, Maidana was caught with a lot of punches before coming up with the knockout blow.

Last time out in August, Maidana had a foul-filled twelve round victory against 36 year old American veteran DeMarcus Corley, himself a former WBO light welterweight champion.

Argentina may not have produced the amount of great fighters that other Latin American countries like Mexico, Puerto Rico and Cuba have, but those that have emerged over the years like Luis Angel Firpo, Oscar Bonavena, Carlos Monzon, Victor Galindez and current idol Sergio Martinez tend to be tough, brave warriors with larger than life personalities. Can Maidana join Martinez as a new boxing hero for Argentina?

Prior to the Malignaggi fight, I would have rather Khan vacated the title than fight Maidana. I was not alone, indeed Roach himself said words to that effect at the time. Not anymore.

Without doubt, the Argentinian does hit hard, but he lacks accuracy with his shots, and generally needs several bites at the cherry before putting his man away. As a boxer, his skill are rudimentary at best. His work is often ragged, and he appears to lack concentration.
He is extremely tough, and has no problem taking punches if it means landing his own. At 5′ 9” he will only be an inch shorter than Khan, but is a small junior welterweight and usually looks the smaller man in the ring.
Maidana is the dirtiest fighter in the division, favoring a vicious hook to the back of his opponent’s neck as his weapon of choice, and his tactics will surely be to rough Khan up and knock him out of his stride.

If Khan sticks to the game-plan Freddie Roach has prepared for him, he will be just too good in every department for Maidana: too good defensively, too good tactically, too fast, too big, too strong.
Also, lets not forget Khan is a devastating puncher in his own right. I see Khan controlling the fight at a distance and drilling Maidana with hard jabs and straight rights. Around the tenth, the temptation will be to finish the Argentinian off. Khan will step up the pace, and by the eleventh the referee will have seen enough.

Khan by TKO in eleven.