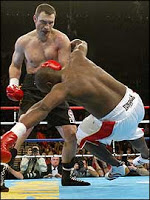 Vitali Klitschko defends his WBC world heavyweight title against Atlanta´s Kevin Johnson this Saturday night at the Post Finance Arena in Berne, Switzerland. If you are thinking ´´hang on a minute, hasn’t this guy just fought?“ the answer is yes.
Klitschko kayoed Chris Arreola in Los Angeles just 76 days ago. In fact, this will be Klitschko´s fourth title fight since returning to the ring fourteen months ago.

It will be the Ukraninans fourth defense of the WBC belt in two reigns as champion. His challenger Kevin Johnson is undefeated in 22 fights (9 ko´s, 1 draw), and is currently ranked 6th by the WBC and 6th by the WBA. Johnson’s biggest win came in his last fight when he stopped previously undefeated Devin Vargas in six rounds earlier this year. His record also includes a fifth round kayo over 41 year old former WBA heavyweight champion Bruce Seldon. The 30 year old Johnson is more of a slick boxer than a puncher and has good hand and foot speed.

Vitali Kitschko returned to the ring in 2008 after almost four years of forced retirement due to spinal and knee injuries. When he was granted a straight shot at the title by the WBC without any tune up fight, it was considered outrageous and ludicrous by the boxing press. The champion, Nigeria´s Samuel Peter was a brutal puncher. But Klitschko thrashed Peter, winning every round before the Nigerian pulled out before the start of the ninth. Subsequently Klitschko has beaten cagey Cuban Juan Carlos Gomez on a 9th round TKO in March of this year, and six months later he gave undefeated Mexican-American Chris Arreola a dreadfull beating in his hometown of Los Angeles before Arreola´s corner pulled him out before the start of the eleventh.

Despite being 38 years old, Klitschko is looking as good now as he ever has. He is supremely confident in his own abilities, and hell bent on making up for lost time in the ring.

At almost 6´8´´, Klitschko towers over the 6´3´´ Johnson. In his last fight, Klitschko was a career high 252 lbs (eighteen stone) but as per usual he was as lean as a welterweight. Johnson was 246 lbs in his last fight against Vargas, but would do better to come in a good ten pounds lighter before his title shot.

Klitschko, or ´´Dr. Isenfaust“ (Doctor Ironfist) as he likes to be known in the ring, is a huge star in Europe, and all 12,000 tickets at the Post Finance Arena sold out in a few hours.

“I’ll shock the whole world in nine rounds,” Kevin Johnson said at Monday’s press conference. “The only people who could have beat me are Muhammad Ali or Larry Holmes.”

That sounds a little like someone whistling a tune as he walks past a graveyard. My prediction? Klitschko by TKO inside ten.