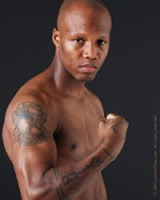 Amir Khan has named Zab Judah, Juan Manuel Marquez and David Diaz as targeted opponents for his US debut. Speaking on Sky Sports news, Khan also admitted that a fight with Ricky Hatton would be ´´the biggest in British boxing history.“
Khan said he was ´´surprised“ at how quickly he knocked out Dmitry Salita in Newcastle at the weekend, saying he expected to get to the Ukranian in the later rounds. The previously undefeated Salita lasted just 76 seconds.
When asked what he thought of his coach Freddie Roach being quoted as saying that Khan was a ´´work in progress,“ he replied that Roach was a great trainer but that regular sparring with Manny Pacquiao had also improved him as a fighter.
Freddie Roach had said that working with Khan had excited him in the same way as when he had begun working with Manny Pacquiao eight years ago.
“I’ve been with Amir for a year now and we have a lot of time. I think he’s about halfway there. He’s a world champion which is a great feat in itself but I think he has a bright future and can be a multi-champion in a lot of different weight divisions. That’s long-term though, a lot of things can happen between now and then. I think he has the potential to be a superstar and win multi-weight titles, for sure.”
The mention of Judah in the Sky interview was an exciting surprise. The controversial New Yorker would be Khan´s most dangerous opponent so far by a country mile.
The Brooklyn born, Las Vegas based Judah is 32 years old. His record stands at won 38 (26 ko´s) lost 6. His last big fight was a technical decision loss to Joshua Clottey last year. He has won two since then. His last big win was a ninth round TKO over Corey Spinks to win the WBC, WBA and IBF welterweight titles in 2005.
An outrageously talented boxer puncher, Judah took a record of 27 – 0 and the IBF junior-welterweight title into a unification fight with WBC champion Kostya Tszyu in 2001. Judah was a 3-1 favorite to win, and late in second he was already well on top when Tszyu floored him with a tremendous right. Judah got to his feet before his head had cleared, and proceeded to do an impersonation of a break-dancer as he staggered across the ring. Referee Jay Nady had no option but to stop the fight in Tszyu´s favor. Judah, furious with the stoppage, hurled his corner stool at the referee, and tried to punch him in the throat. Judah was fined 75,000 dollars and suspended from boxing for six months.
In his fight with Floyd Mayweather in 2006, Judah started brightly and kept the bout on even terms in the early rounds. But by the eighth Mayweather was clearly on top and started to deliver a solid beating. In the tenth, with Judah in big trouble, he delivered a vicious low blow, followed by a hard shot to the back of Mayweather´s head as he went down. As the referee called time-out, Mayweather´s trainer and uncle Roger Mayweather jumped into the ring and tried to attack Judah, which in turn saw Yoel Judah, Zab´s trainer join the fray. A full scale riot ensued that was eventually broken up by the Las Vegas PD. This time, Judah received a 250,000 dollar fine and a one year suspension from boxing.
Judah hasn’t competed at light-welterweight since 2003, but at just 5´7´´, he should have little trouble getting back down to 140lbs. For Judah´s name to be mentioned as an opponent for Khan, the wily Roach must feel that he is ready to be taken into camp. Judah has only lost to marquee names, and will truly fancy that he can beat Khan. If this fight comes off, it should be very interesting, and with Zab Judah in the ring, anything can happen.