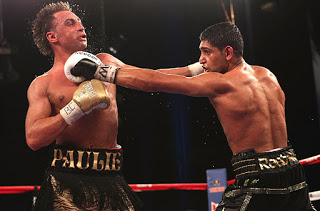 Before this weekend’s action they were destined to meet at some point in a classic, all-British promotion that would have made them both a considerable amount of money and left a defining mark on the sporting landscape.

As it stands the Bolton fighter, after blitzing Paulie Malignaggi in the final round for an impressive stoppage win, has the luxury now of choosing between an array of challengers for his WBA light-welterweight title – including Mitchell’s conqueror at lightweight last night, Michael Katsidis.

Within hours of the Australian’s stunning three-round win over the Dagenham lightweight at Upton Park, Khan was thrilling New York on his US debut at Madison Square Garden with an 11th-round stoppage of the awkward and willing Brooklyn fighter Malignaggi.

It should have been a hometown celebration; but it was muted by a lack of fans.

The Briton’s US business partner, Richard Schaefer of Golden Boy Promotions, said afterwards: “I think Khan is probably going to be fighting 31 July in the UK. That’s just before [Marcos] Maidana [whom Khan has been accused of ducking] fights.

“After that he’ll come back to the States, but we’ll have to discuss opponents. Another one of our fighters had a big victory in England tonight – Katsidis, who took care of Mitchell. Katsidis is always an exciting fighter, who can really rock the house.” read more