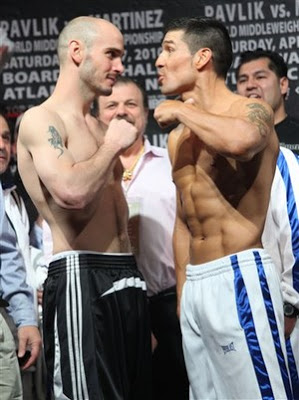 Youngstown Ohio´s big punching Kelly ”The Ghost” Pavlik faces what might just be his toughest test so far when he defends his WBC and WBO middleweight titles against the very dangerous WBC super welterweight champion Sergio Gabriel Martinez
at the Boardwalk Hall, in Atlantic City, New Jersey this Saturday night.

28 year old Pavlik (36-1, 32 ko´s) badly needs a big win against a highly rated opponent following
by-the-numbers victories last year over Marco Antonio Rubio (TKO 9) and Miguel Espino (KO 5), fighters who weren’t even household names in their own households.
Kelly´s reputation was built on three fights; his 2007 seventh round knockout of Edison Miranda, his seventh round knockout of Jermain Taylor to win the WBC and WBO titles in the same year, and his points win over Taylor in a February 2008 rematch, performances that made him one of boxing´s most marketable stars. But Pavlik´s aura of invincibility was destroyed when he was soundly thrashed on points by a 43 year old Bernard Hopkins in October 2008. Hopkins put on a masterclass of boxing in Atlantic City, and Pavlik was second best all night long.

To his credit, Pavlik and his promoter Bob Arum tried to get his career back on track last year with a matchup against highly rated former WBO welterweight champion Paul Williams, but a serious staff infection in his left hand led to Pavlik being hospitalized, canceling the bout.

Although 35 years old, Martinez, one of handsomest fighters you are ever likely to see, looks and fights like a man ten years his junior. A pro for 13 years, he began his career boxing in his native Argentina in 1997.
In February 2000, after going 16-0-1, Martinez was dealt a rude awakening on his American debut when he was knocked out in seven rounds by future WBA and WBO welterweight champion Antonio Margarito on the Erik Morales v Marco Antonio Barrera undercard in Las Vegas.

After that disastrous result, Martinez returned to Argentina and rebuilt his career. In 2002, he uprooted to Spain, and has been based in Madrid ever since. In June 2003 Martinez defeated Londoner Richard Williams at the M.E.N Arena for the lightly regarded IBO light middleweight crown. He defended against Williams ten months later at the Kings Hall in Belfast, this time scoring a ninth round stoppage. Sandwiched in between those bouts was a twelfth round TKO over American based Brit Adrian Stone.
In April 2007, Martinez returned to the United States to meet Mexican Saul Roman in a WBC super welterweight title eliminator in Houston, Texas. Seven years earlier Martinez had been flattened by another Mexican slugger on his US debut. If Martinez was experiencing any sense of ‘deja vu’, he didn’t let it show, knocking out Roman in the fourth round with a brutal body shot.

Martinez racked up three more wins on US soil before stopping Alex Bunema in eight rounds to gain the WBC´s interim super welterweight title. In February 2009, Martinez defended his title with a highly controversial majority draw against big punching Puerto Rican Kermit Cintron. In the seventh round, a big left from Martinez floored Cintron, who barely beat the count. Initially, it appeared the referee had counted the Puerto Rican out, and Martinez began to celebrate accordingly, but several minutes later, it was decided that Cintron had indeed beaten the count, so the fight was allowed to continue.
In the twelfth, the referee instructed the ringside judges to take a point off Martinez´ scorecard for hitting behind his opponents head. That deduction effectively cost the Argentinian the decision, but nevertheless, it was his most impressive performance in an American ring so far.

When Kelly Pavlik withdrew from his scheduled title defense against Paul Williams last December, Martinez stepped in as a replacement. The resulting contest was one of the best fights of 2009. The pair exchanged first round knockdowns, and then waged war for twelve rounds. Martinez started and finished the stronger, with Williams dominating the middle rounds. The majority decision went in favor of the American, but many at ringside were convinced Martinez was robbed.

In his last two fights Martinez has faced two vaunted punchers in Cintron and Williams, yet boxed much of both bouts with his hands down by his sides, such is the speed of his reflexes. Against the 6’2” Tommy Hearns-esque Williams, the 5’11” Martinez proved he can deal with height and reach disadvantages, something he will have to cope with again against the 6’3” Pavlik.

This is such an intriguing clash between two outstanding fighters with contrasting styles, it is hard to pick a winner. Martinez may be a better boxer than the limited Pavlik, but, although Martinez can punch, Pavlik´s right is a Howitzer.

Pavlik may have been schooled by Hopkins, but he outpointed Jermain Taylor in their rematch, and Taylor is definitely a quality boxer, so Kelly can box when he needs to.

However, much as I am a big fan of Pavlik, I´m leaning toward the Argentinian to do a similar job on Kelly as Hopkins did. Right now, the Argentinian looks the total package, and I´m looking to him to cause an upset.

Martinez to win via a unanimous decision.