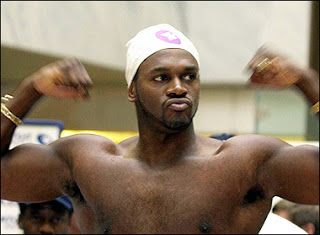 Audley ”A-Force” Harrison will meet old foe, Reading´s Michael Sprott on April 9th at the Alexander Pavilion for the vacant European heavyweight title, it was announced today.
Sprott famously derailed Harrison´s career in 2007, knocking him out cold in the third round. Such was severity of the knockout, at the time it looked like the end of the road for Harrison.
The rematch comes about due to Albert Sosnowski´s decision to vacate the European crown ten days ago. The Essex based Pole will now fight Vitali Klitschko for the WBC heavyweight title in Germany on May the 29th.
Harrison had signed a contract to meet Sosnowski, and retained his challengers spot. Harrison´s promoter Barry Hearn scoured the upper echelons of the European rankings, but none of the big names were prepared to make the April 9th date.
Suddenly Michael Sprott put himself in the picture by scoring a first round knockout of German journeyman Werner Kreiskott on Saturday night´s Vladimir Klitschko v Eddie Chambers undercard in Dusseldorf.
Although nowadays 35 year old Sprott (32-14, 17 ko´s) is considered something of a journeyman fighter, he is in fact a former British, Commonwealth, and three-time European heavyweight champion.
Before flattening Kreiskott on Saturday, Sprott had lost four of his last five fights. But Sprott knows his way around a ring, and hasn’t been stopped since he lost in 8 rounds to former WBA champion Ruslan Chagaev in 2006.
Sprott has claimed more than his share of European scalps over the years, with names like Timo Hoffman, Pele Reid, Danny Williams, Cengiz Koc and Renne Dettweiler, as well as Harrison featuring in Sprott´s ‘win’ column.
One of the reasons Sprott has suffered so many losses is that his bouts are always against top opposition often at short notice, and his record reads like a who´s-who of European heavyweight boxing.
London born, California based Harrison (26-4, 19 ko´s), now 38, is still best known as the super-heavyweight gold medalist in the 2000 Olympics in Sydney. Despite his huge size and obvious talent, Harrison has failed to fulfill his potential – the knockout loss to Sprott being his career low point. He went some way to resurrecting his career when he won Sky TV´s Prizefighter tournament last October.
Harrison told the press today that the Sprott fight would be his last throw of the dice;
“I’m calling this ‘revenge or retirement’,” Harrison told reporters. “If I can’t get revenge over Michael Sprott my career can’t go forward. I know that’s the kind of mentality I’m taking into the ring. If I don’t win this fight I will retire but I’m going to win this fight, no doubt. Obviously I made some major errors in that fight and Michael Sprott was able to knock me out. I’ve really been looking forward to having the opportunity to avenge that defeat. Now I’m getting the chance to rectify my mistakes. It’s definitely a reality that winning this fight puts me in a position to challenge one of the world champions.”
With Europeans dominating heavyweight boxing these days, and names like Povetkin, Valuev and Adamek filling the top spots in the current European Boxing Union (EBU) rankings, its something of a stretch to see Michael Sprott (EBU ranked 8th ) and Audley Harrison (EBU ranked 9th ) battling it out to be crowned king of Europe.
But as the saying goes, it is what it is, and what it should be is a right tear-up!