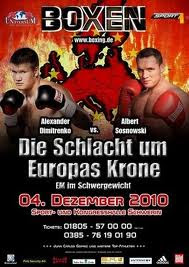 Essex based Pole Albert Sosnowski gets a chance to regain the European heavyweight title when he challenges Ukrainian giant Alexander Dimitrenko tonight at the Sport and Congress Center in Schwerin, Germany.

Defending champion Dimitrenko, all 6′ 7” of him, is hoping to follow in the footsteps of his illustrious fellow countrymen Vitali And Vladimir Klitschko to world title success.

31 year old Sosnowski (46-3-1, 28 ko’s) won the European title last December with a twelve round decision over Italian Euro-stalwart Paulo Vidoz. He vacated the crown four months later when he was given the opportunity to fight for the WBC heavyweight title in May of this year following the breakdown in negotiations of the proposed bout between champion Vitali Klitschko and former WBA title holder Nikolay Valuev.

The grateful Sosnowski grabbed the opportunity to fight for the title and box before a 60,000 crowd at the fabulous Veltins Arena in Gelsenkirchen, Germany.
Despite being a massive 50/1 underdog, Sosnowski didn’t disgrace himself on fight-night, taking the battle right to the 6′ 8” champion in a way that previous challenger, no.1 contender Kevin Johnson had failed to do.
Sosnowski gave an excellent account of himself for eight rounds until Klitschko’s thudding shots began to get to him, and the bout turned one-sided. A huge right felled Sosnowski in the tenth, and referee Jay Nady decided he had seen enough.

Sosnowski got back to winning ways in a bout in Wigan this September, knocking out journeyman Paul Butlin in one round. Butlin has recently taken a pair of hulking 6′ 5” European prospects named Johann Duhaupas and Adrzej Wawrzyk the distance, making Sosnowski’s performance look all the more impressive.

Sosnowski turned pro back in 1998, and lost just twice in his first ten years, on a ninth round TKO to Canadian Arthur Cook in 2001, and an eight round decision to tricky American veteran Zuri Lawrence in New York in 2008. During that time he racked up some 43 victories, although his record during this phase of his career reads more like a ‘who’s he?’ than a ‘who’s who’ of heavyweight boxing, noticeable exceptions being a six(?) round decision over former WBA cruiserweight champion Orlin Norris, and a two round KO over Argentinian puncher Manuel Pucheta.

The loss to Lawrence was the wake-up call Sosnowski clearly needed, and since then his career has moved up to another level. In November 2008, he scored a huge win, flattening Danny Williams in eight rounds, and followed that up five months later with a creditable draw over the highly regarded unbeaten Italian prospect Francesco Pianeta. This pair of results were enough to earn Sosnowski his European title shot.

At 6′ 3” and always a ready 230 lbs, Sosnowski is a solid all round boxer-puncher with good speed and mobility and excellent fitness. Although he has fallen outside the world’s top ten, he is rated mandatory challenger to current EBU champion Dimitrenko.

28 year old Alexander Dimitrenko (30-1 20 ko’s), knows an impressive performance against Sosnowski tonight will virtually guarantee him a 2011 title shot against one of the Klitschko brothers.

Turning pro in 2001, the young giant was brought along steadily, his first real test being an eight round points win over former British and Commonwealth heavyweight champion and one time Mike Tyson opponent Julius Francis in July 2004. Four months later he won another eight rounder against the clever American journeyman Ross Purity, famous for stopping an unbeaten Vladimir Klitschko in 1998.

Dimitrenko’s next big test came in September 2005 when he met two-time world title challenger Vaughn Bean of the United States. The 5′ 11” Bean, a skilled defensive fighter who’s only career stoppage loss was an 11th round TKO against Vitali Klitschko, gave the young Dimitrenko a good workout before losing a close ten round decision.

In November 2007, twenty five year old Dimitrenko took on the former Golden Boy of German boxing, 6′ 8” giant Timo Hoffmann, at that point the only man to go the distance with Vitali Klitschko.
In what was his career best performance thus far, Dimitrenko boxed well and moved skillfully around his lumbering opponent, dominating a tough encounter before scoring a TKO over Hoffman in the 12th round.

In 2008, Dimitrenko stopped American fringe contender Derric Rossy in five rounds, and banged out the once promising German based Serb Luan Krasniqi in three. Next up came the acid test: a WBO title eliminator for a shot at Vladimir Klitschko against the much smaller but highly skillful American ”Fast” Eddie Chambers, the bout to take place in Hamburg in September 2009.

In that fight, the classy Chambers, beaten only once by top contender Alexander Povetkin in an IBF world title eliminator the year before, was a little too seasoned for Dimitrenko, dominating their twelve rounder, and despite being six inches shorter and 45 lbs lighter, taking the fight to the Ukrainian and consistently beating him to the punch. Chambers won a majority decision, but impartial observers knew that Dimitrenko had been handed a boxing lesson.
Dimitrenko’s limitations as a fighter had been exposed: he looked stiff and awkward against the fleet footed Chambers, and despite his huge size, lacked true world class punching power.

In his latest fight, Dimitrenko won the European heavyweight title with a fifth round TKO over the very ordinary Ukrainian Yaroslav Zavorotnyi. Although Dimitrenko looked sharp and boxed efficiently, Zavorotnyi offered little resistance and barely attempted a meaningful punch in the entire fight. Dimitrenko looked impressive in finishing off his opponent, but in truth the fight did little to advance his credibility rating as a genuine world title threat.

Dimitrenko is currently ranked 8th by the WBO and WBA and 9th by the IBF. A win over Sosnowski, the WBC 13th ranked heavyweight, will push him back up the rankings.

Despite being the bookies underdog at 5/2, this is a fight that Albert Sosnowski is more than capable of winning. Going toe to toe with Vitali Klitschko for ten rounds will have done his confidence more good than harm. He has mixed it up at a higher level than Dimitrenko, and despite being four inches shorter and thirty pounds lighter, will be the stronger man physically.

Sosnowski must keep the pressure on Dimitrenko, closing the gap between him and his opponent and staying within his own punching range. If he stands off and lets the Ukrainian take pot-shots at him, he will lose, possibly by a TKO.
I see Sosnowski forcing his game-plan of constant pressure on Dimitrenko, controlling the fight and winning a surprisingly comfortable decision.