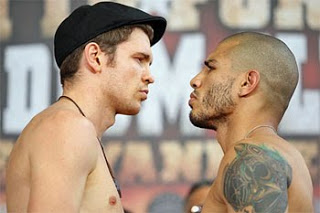 Foreman won the title last November with a unanimous decision over Daniel Santos. Foreman v Santos was the main bout on the Miguel Cotto v Manny Pacquiao undercard. Cotto lost his WBO welterweight title to Pacquiao via a twelfth round TKO.

29 year old Foreman (28-0, 8 ko´s) was born in Gomel, Belarus, and began boxing at the age of seven. In 1989 his family moved to Israel, where Foreman continued to box – at an Arab gymnasium.
“The first time I walked in, I saw the stares. In their eyes, there was a lot of hatred,” remembers Foreman.
”But I needed to box – and boy, did they all want to box me!”

Foreman became a three time Israeli national champion, and continued his amateur career when his family moved to the United States, winning the New York Golden Gloves in 2001. He left the amateurs with a 75-5 record.

Turning pro in 2002, the young Foreman was more of a puncher in his early days, stopping six of his first ten opponents. He soon developed the professional style that is familiar today; excellent footwork, plenty of movement – both to the right and left, lots of jabs, and a stinging right cross.

Foreman was brought along steadily on a diet of solid club fighters and journeymen, often gaining exposure whilst fighting on big fight under cards.
In June 2007, Foreman took a step up in class with a bout against Philadelphia´s hard hitting Anthony Thompson on the Cotto v Judah undercard at Madison Square Garden. Foreman emerged with a hard fought split-decision victory.

Six months later Foreman came through his toughest test yet, surviving an early cut eye and a rocky fourth round to gain a split-decision over Bronx based Ukrainian Andrey Tsurkan for the North American Boxing Federation (NABF) light middleweight title, his first professional title.
Foreman defended his NABF belt twice with decisions over Saul Roman and James Moore in 2008.
In June 2009, Foreman fought 37 year old Detroit veteran Cornelius Bundrage in an IBF title eliminator. The talented but erratic Bundrage, in his fifteenth year as a pro, had beaten former IBF light middleweight champ Kassim Ouma in 2008 and was hot off a fifth round knockout win over Russian prospect Zaurbek Baysangurov.

Foreman controlled the first three rounds against Bundrage, but in the fourth an unintentional headbutt from the American left Foreman unable to continue, ruling the bout a no-contest.

Foreman´s camp could have chased a title shot against IBF champion Cory Spinks, a light punching but highly technical three time world champion who may have been a little to cute for Foreman. Instead they targeted WBA champion Daniel Santos, a rugged 34 year old Puerto Rican warrior and former two time WBO title holder who had outpointed Antonio Margarito in 2004, and pulled off a big upset when he had flattened previously undefeated Haitian born Canadian Joachim Alcine in six rounds to the lift the WBA title in July 2008.

In what was the chief supporting bout for the Cotto v Pacquiao superfight, Yuri Foreman came of age, clearly outpointing the durable, hard punching Santos over twelve rounds, and flooring him twice in the process. The only negative that could be taken from Foreman´s performance (although some experts see it as a positive) was that Foreman had an excellent opportunity to stop Santos in the twelfth, but chose instead to take it to the scorecards.
Against Cotto, he may not have that luxury.

Puerto Rico´s 29 year old Miguel Angel Cotto (34-2, 27 ko´s) remains one of the most compelling and exciting boxers in the world, despite losing his two most recent high profile fights.

After a stellar amateur career, Cotto turned pro in 2001 and was soon tipped by boxing experts to reach the very top. The possessor of a relaxed, rolling style from which he releases rapid, concussive punches, Cotto won the WBO light welterweight title in September 2004 with a sixth round knockout of Brazilian Kelson Pinto, and defended it six times, five by KO.
In December 2006 he stepped up to welterweight, and forced the highly skilled and undefeated fellow Puerto Rican Carlos Quintana to retire after five brutal rounds.

Four title defenses followed, including an 11th round TKO over Zab Judah, and a unanimous decision over Shane Mosley, victories that pushed Cotto to the top of boxing´s pound-for-pound listings.

In July 2008 Cotto lost his world title to Mexico´s Antonio Margarito in a thrilling encounter.
Margarito, the pre-fight underdog, battered the incredibly brave Cotto from pillar-to-post en-route to an eleventh round TKO, pounding the Puerto Rican´s face to a swollen bloody mess on the way.
When Margarito was caught six months later with plaster of Paris inserts in his bandages prior to his title defence against Shane Mosley, most boxing writers took the natural line in thinking that Margarito had employed the same tactic, that time successfully (and horrifically so), against Cotto.

Cotto began the process of rebuilding his shattered career with a fifth round TKO in February 2005 over England’s Michael Jennings for the vacant WBO welterweight title.

Five months later, Cotto faced boxing´s ‘Man of the Moment’, the phenomenon that is Manny Pacquiao, and was stopped in the twelfth round.

Cotto and Pacquiao waged war for the first six rounds, and although Cotto was down in the third and fourth rounds, was very much in the fight. The second half of the contest became more and more one-sided in Pacquiao´s favour, and after a brutal ninth round, Cotto´s corner could have pulled him out.
Once again, as he had in his fights against Margarito and Clottey, Cotto showed incredible heart, and continued fighting into the twelfth, where another murderous onslaught from Pacquiao left the referee with no choice but to stop the fight.
Afterward, Pacquiao gave Cotto immense praise, saying it had been ”his hardest fight”, and that Cotto was ”a great fighter.”

Have the fights against Margarito, Clottey and Pacquiao taken too much out of Cotto? Will the 5’11” Foreman, who has boxed his entire career at light middleweight, be just too big for the 5’7” Cotto, who was never a big welterweight, and has never boxed at 154lbs before.
As many as 30,000 fans are expected in Yankee Stadium. Cotto is a god in New York, with a huge Puerto Rican following, and has sold out Madison Square Garden several times. Foreman should also have his supporters from Brooklyn, ensuring an incredible atmosphere for this much anticipated ‘boxer v puncher’ encounter.

The bottom line is this; Miguel Cotto represents a huge step up in class for Foreman. The fact that Cotto has employed legendary trainer Emanuel Steward to prepare him for this fight shows that he will not be in Yankee Stadium just for the paycheck – he wants to become a three weight world champion.

Cotto was a vicious puncher at light welterweight and hard puncher at welterweight.
At 154lbs, he is still likely to be by far the hardest and fastest puncher Foreman has fought. In comparison, Foreman has never stopped a quality opponent, and his power is unlikely to trouble Cotto.

Foreman has displayed three things in his career; a sturdy chin, decent boxing skills and good mobility. These quality will get him through the fight, but they wont be enough to win it. Cotto, himself a sound technical boxer, is a master of cutting down the ring, and will trap Foreman on the ropes time and again, unleashing his fast, powerful combinations.