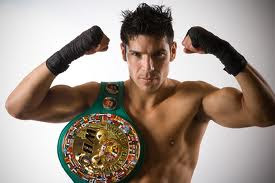 Argentina’s Sergio ”Maravilla” Martinez will defend his world middleweight  championship for the sixth time when he takes on Britain’s unbeaten Martin Murray next April.

Martinez, who won the crown from Kelly Pavlik in 2010 will turn 38 in February, but he shows no sign of slowing down. He dominated the 26 year old pretender Julio Cesar Chavez Jr last time out, winning eleven and a half rounds comfortably before walking into a Hail Mary of a right hand late in the twelfth, and almost blowing the victory.

Martinez must have come close to giving his trainer Gabriel Sarmiento a coronary when after being floored he elected to trade with Chavez Jr rather than clinch until the bell. Martinez was clearly still stunned after the knockdown, and was also flagging badly. The much bigger Chavez Jr who had barely landed a punch in the fight, finished like an express train. One can only speculate what might ave happened if he had landed with that punch earlier in the round. 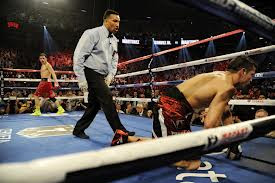 Nevertheless, Martinez won the fight and won it big. A rematch between the two is likely down the road, although if it’s in 2013 it is hard to see how the strong but limited Chavez Jr can improve on his performance, unless of course he lands with another lucky shot, only this time earlier. 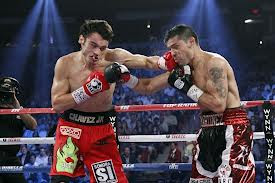 So who can dethrone Martinez at middleweight? 30 year old Martin Murray is big, strong and undefeated (25-0-1, 11 KOs), and he showed in a draw against then WBA middleweight champ Felix Sturm last November that he is durable and resolute. Will that be enough to take Maravilla’s crown? Unlikely. Most experts expect Murray to go the way of Martinez’s two recent British challengers, Darren Barker and Mathew Macklin, both of whom were stopped in exciting, competitive fights.

The two main threats to Martinez (50-2-2, 28 KOs) – and two fights he would dearly love – are against Floyd Mayweather Jr and Saul ”Canelo” Alvarez. Mayweather, the current WBC welterweight  and WBA light middleweight champ and box office numero uno is unbeaten in 43 fights and is a five-weight world champion. He is obviously the dream opponent for the Argentine, who knows that a Mayweather match-up would set him up financially for life, and also gain him the prestige he clearly desires.

The problem is, the only way Floyd would entertain such a bout would be at a catch-weight that suited him and depleted Martinez, and even then, Mayeather, who is prouder of his ”O” than anything else in his career, would most likely find Sergio’s size advantages (5’10” to 5’7” in height, 75” to 72” in reach, and as much as 20 lbs. weight advantage on the night), plus his speed, southpaw skills and lights-out power just too much of a risk. 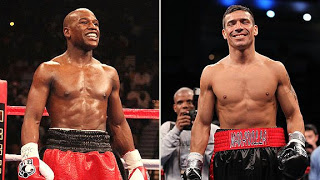 The other big fight of course would be a clash vs the so called ”future of boxing” Canelo Alvarez. The undefeated Mexican (41-0-1, 30) is a box-office sensation on both sides of the border, and will sell out any venue in Mexico or the US. A fight between the pride of these two great boxing nations would be huge, but once again, Martinez looks a little too big, powerful and seasoned right now for Canelo, and it is unlikely that Oscar De La Hoya would risk his no.1 star against Maravilla just yet.

In the meantime, Martinez is forced to mark time against tough opponents like Murray, where the risk versus reward factor is limited. If Maravilla were to get a dream sequence of fights, and score big wins over Mayweather and Canelo, the Argentinian’s place in the top-ten greatest middleweights of all time, alongside fellow countryman Carlos Monzon, US legends Sugar Ray Robinson, Marvin Hagler, Bernard Hopkins, Charley Burly, Micky Walker, Stanley Ketchel and Harry Greb, Frenchman Marcel Cerdan.

If neither of those bouts ever happen, we may be left to ponder just how great Maravilla might have been.