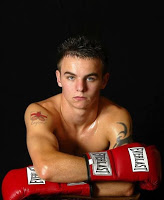 While Amir Khan received rave reviews for his 76 second demolition of manufactured title challenger Dmitry Salita, the truly outstanding result from Saturday nights bill in Newcastle hardly raised a ripple.
Dagenham’s Kevin Mitchell out boxed menacing Colombian Breidis Prescott, winning a lopsided twelve round decision in an eliminator for the WBO lightweight title, in what might just have been THE domestic performance of 2009. If you are just a casual fight fan, let me take a moment to explain the significance of this result. This is the same Breidis Prescott who clobbered Amir Khan to his only defeat in just 54 seconds last year. That knockout was brutal, and the Colombian´s power was frightening. With that result, overnight Prescott gained the aura of a lightweight Sonny Liston. At 5´11´´ he was huge for the division. No lightweight in their right mind wanted to fight him!
Going in to Saturday’s bout, Prescott had flattened 18 out of 22 victims against one split decision loss in his last fight. The much smaller Mitchell deserved huge credit just for taking on the man who had flattened the star of the whole Newcastle show. But take him on he did, and in negating the Colombians size and punching power and giving a masterful display of defensive boxing, the baby faced Mitchell raised his ledger to 30-0, with 22 stoppages. Mitchell made Prescott look crude at times. The first two rounds were close, but after that he pulled away. By the eighth Prescott was looking tired, but he is so heavy handed he always looked dangerous. Mitchell dropped his hands and taunted Prescott in the final round, as Prescott lunged at him desperately.
What now for the boy from Essex? Next up should be a crack at the WBO lightweight champion. But which one? Because the WBO being the WBO, there are in fact two champions.
The WBO super champion is Juan Manuel Marquez, who also holds the WBA belt. Despite being 36, the Mexican is a formidable opponent at lightweight, and he may even now be just a little too skilled for Mitchell. There is a strong possibility that Marquez will fight Ricky Hatton in the New Year, so Mitchell will most likely have to look to the other champion. The WBO interim champion is exciting Australian puncher Michael Katsidis. Mitchell v Katsidis would be a thriller, and a big attraction in London. But can Mitchell win? If he can negate the Aussie´s undoubted power, as he did Prescott´s, it could become very interesting. With Mitchell´s combination of speed, skill and power, a late stoppage or a close point’s win is not unthinkable. After the way he handled Breidis Prescott, anything is possible.