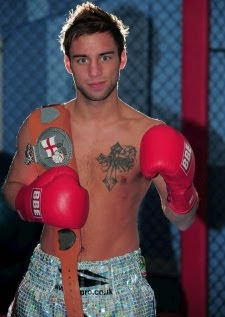 The remarkable Shinny Bayaar makes the first defence of his British flyweight title this Friday when he takes on unbeaten prospect Ashley ”Flash Ash” Sexton at the Goresbrook Leisure Centre in Dagenham, Essex.
Bayaar v Sexton is the featured bout on this weeks edition of ‘Live Friday Fight Night’ on Sky Sports.

Oldham based Bayaar (15-4-1, 4 ko´s) won the British title last October with a split decision over defending champion Chris Edwards. Originally from Mongolia, Bayaar has been boxing exclusively in the UK since 2001 and received British citizenship in 2009 which granted him eligibility to box for the British crown. Winning the British title remains the high point of a ten year career that began in the most discouraging of circumstances.

Seldom has a raw novice had such a tough initiation into the world of professional boxing as did a 22 year old Shinny Bayaar when he turned turned pro in Mongolia in February 2000.
His debut was a ten round draw against against fellow Mongolian Yura Dima, a cagey veteran who´s record at the time was 10-2. If that was tough, Bayaar then traveled to the Philippines for his second pro fight, and faced local favorite Manny Melchor, a 72 fight veteran and former IBF minimum weight world champion. Bayaar lost a twelve round decision.

Bayaar then made the brave decision to move to Britain, and in January 2001 made his UK debut, dropping an eight round decision to novice super bantamweight Damien Dunnion. After scoring his first two pro wins, Bayaar slipped to a less than impressive 2-3-1 when he lost a four rounder to Nigerian Sunkanmi Ogunbiyi.

Shinny won his next four fights against moderate opposition before facing undefeated Martin Power on the Ricky Hatton v Ray Olivera undercard in December 2004. Bayaar lost a ten round decision to Power, who would win the British bantamweight title in his next fight. It remains Bayaar´s last defeat.
Since then, Shinny has gone undefeated for over five years, and is on a nine fight winning streak. He is currently ranked 7th by the EBU.

In just 17 months as a pro Sexton has created a buzz in the flyweight division that has been missing for years. After seven wins against moderate opposition, Sexton served notice to his potential last September when he flattened Brazilian fringe contender Darli Goncalves Pires in just 154 seconds.
In January of this year Sexton knocked out tough former British title challenger Usman Ahmed with a perfect straight right, again in the first round.

Suddenly, Sexton has become the most exciting British flyweight prospect since Charlie Magri, and the bookies have made him a strong 1/3 favorite to lift the British title on Friday, with Bayaar the 9/4 underdog (bet365).

A confident but likeable character, Sexton is looking forward to this Friday´s title chance.
”I am absolutely buzzing at the moment and really excited for my big chance. I have always boxed on the undercard, and sat back and wondered what it’s like to be picked as the headliner – and now I have got that chance. Everything is such a big thing on the night; I took a step back the other day and just thought, wow! Once I get the job done and Bayaar out of the way, I want to make a couple of quick defences, and then get in with Commonwealth champion Chris Edwards.”

Britain has a proud flyweight tradition, dating all the way back to the 1920´s and the legendary Jimmy Wilde, through to the golden era of the 1930´s and 40´s when British fighters dominated the division and the likes of Benny Lynch, Peter Kane, Jackie Patterson and Rinty Monaghan all held the world title.
In the 80´s and 90´s, Charlie Magri, Duke McKenzie and Dave McAuley also won versions of the world title and resurrected interest in the flyweight division.

Now young Ashley Sexton looks to have the star quality needed to draw the public’s attention to the flyweights once again. In Shinny Bayaar he meets a tough opponent who can truly test him. Bayaar has never been stopped, and is always in tremendous condition. Like Sexton, Bayaar is over 5’5” tall, and a big, strong flyweight.
Bayaar may not mach Sexton in technique and power, but he lacks nothing in heart and durability.

This will be the toughest test of Sexton´s fledgling career so far. His manager Frank Maloney obviously thinks he´s ready for it, and I agree.

Sexton by TKO in five rounds.