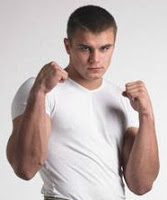 He is undefeated in 26 fights with 21 knockouts and he fights like a young Mike Tyson. He sands 6´1´´ tall and weighs in at a solid 224lbs (16 stone) and has what the Americans used to call matinee idol good looks. All this and he´s just 23 years old.

Introducing the hottest prospect in the heavyweight division: Denis Boytsov.
Boytsov has been wowing both public and press alike with a series of spectacular knockout wins. The young hotshot from Orel, Russia by way of Hamburg has been likened to a young Mike Tyson with his non-stop all-action style and in the way he can end a fight with either a sudden combination or one well placed shot.

You can get a look at Boytsov this weekend when he takes on American Kevin Montiy (17-6, 13 ko´s) on the under-card of the Robert Stieglitz v Ruben Acosta WBO super-middleweight title fight at the Bordelandhalle, in Magdeburg, Germany on Saturday night.

There is a genuine buzz surrounding Boytsov that we haven’t seen about a young heavyweight for some time. In all of his fights he has displayed fast hands, good combinations and heavy punching, and an exciting aggressive style that is a breath of fresh air and a marked contrast to the mauling and pawing we see too often with the big boys.

Short by today’s heavyweight standards, Boytsov tends to come in low behind a good left jab, winging punches from all angles, in a style that is more American than the traditional text-book straight up stance favored by the majority of Eastern European fighters. Ruslan Chagaev the former WBA heavyweight champion and a Boytsov stablemate is nick-named ´´white-Tyson“. If any fighter fighting today deserves the monicker ´´white Tyson“ its young Boytsov.

Boytsov´s progress has been spectacular and already he is ranked 12th by the WBC, 4th by the WBA, 5th by the IBF and 4th by the WBO. If he keeps on winning, a title shot is an inevitability.

In my opinion, good as he is right now, he is at least a year away in terms of experience and physical maturity from a fight with one of the Klitschko´s. If he was to even consider going in with either Vitali or Vladimir, he would have to prepare with fights against tall contenders like Fres Oquendo, Ray Austin or even Michael Grant and Audley Harrison.

With a couple more wins Boytsov could find himself top of the WBA rankings and in line for a shot at Britain’s David Haye. With both men´s kill or be killed styles, that would be the type of match-up that would have the paying public salivating in anticipation!

Boystov´s most impressive outing to date came in June of last year when he battered Ukrainian Taras Bidenko to defeat in six rounds. Bidenko had been unbeaten for four years and on a twelve fight winning streak, but he was swept away by Boytsov. Boytsov is at the same stage of his career as was Tyson before he fought James Tillis in 1986. His management need to select an opponent who can push him to the limits without derailing his progress.
Kevin Monity is unlikely to provide the sternest of tests for Boytsov. The 34 year old from Michigan took big punching New Zealander Shane Cameron five rounds in 2008. In the same year he went the distance with Uzbek strongman Timor Ubragimov. In 2007 he went seven rounds with former world Lennox Lewis victim Michael Grant, so he is unlikely to keel over at the first sighn of aggression. At 6´5´´ tall, Monity might just be be able to keep his chin out of reach of Boytsov´s onslaught for a round or two, but no more than that. Boytsov to win impressively inside three rounds.