Home Archive ”I am prepared to die in the ring” says Lamont Peterson at... 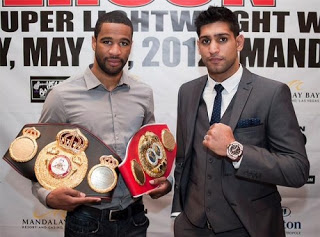 
American Lamont Peterson announced that he was ”doing it for the fans” at the London press conference to publicize his May 19 rematch with Bolton’s Amir Khan for the IBF and WBA light welterweight titles. Last December in his home city of Washington DC, Peterson took the belts from Khan via an ultra close split decision that sparked controversy after it was revealed that the  two points Khan had been deducted for pushing his opponent had been the difference between retaining his title and losing.

Close as the first fight was, many believe that Peterson was a deserving winner, as he had survived a first round knockdown to wage war with Khan for twelve close rounds, staggering the defending champion several times in the process.

On Tuesday, 28 year old Peterson (30-1-1, 15 KOs) told sports writers from around the world that he didn’t feel any obligation to give Khan a second chance, but he was taking on the Briton in a rematch because he believed it was a fight the fans wanted to see.

“Without you all we wouldn’t be fighting. The reason I have decided to take the rematch was not because of anything Team Khan said, or that I have to prove myself to anyone. We are fighting because you all thought it was a great fight, and you all thought that we should do it again. I’m all for pleasing the fans and so that’s why I took this fight.”

Peterson alluded to the continued sniping that has come out of the Khan camp ever since last December when he said:
”Team Khan still have problems with what happened in DC, I can only tell you that nothing shady happened but I’m pretty sure they won’t take my word on that. I just want to say to Team Khan, you have your chance to make things right, I’m looking forward to a good fight. I’ll be training just as hard as you – I’ve been training since that day we stepped out of the ring. So I’ll be prepared and ready to die in the ring to keep those titles.”

When it was Khan’s turn to take the microphone, he once again claimed that it should have been him announced as the winner back in December but stated that he would train harder than ever in a bid to regain his world titles.

“We made a few mistakes in the first fight, but I still thought I won it.” said Khan.” It just hurts me watching that fight and what went on, but we both put on a good fight and this next one’s going to be even tougher. We know what to expect from each other. I know exactly how to deal with it. I started training early for this fight, just to get back into the gym and get back into shape.”

“I’m going to be up with Freddie (Roach) next week in the Wild Card gym and then go to the Philippines for high altitude training, which I’ve only done once before for the Zab Judah fight. I’ve always trained like a challenger, and I want to bring back the titles to Great Britain. You’ll see a different Amir Khan this time, I’ll be explosive as always. Who knows, this next fight can be the best fight of the year. Do not miss this fight, it’s gonna be as exciting as the last one.”

25-year-old Khan (26-2, 18 KOs) was on the verge of a move up to welterweight and a potential mega-matchup with Floyd Mayweather when his plans were put on hold following his upset loss to Peterson. The 2004 lightweight silver medalists at the Athens Olympics had overcome a first round knockout loss to Breidis Prescott in 2008 to win the WBA light welterweight title the following year, and under the tutelage of master trainer Freddie Roach, establish himself as one of the best pound-for-pound boxers in the world.

His blistering hand speed, punching power and solid technical skills seemed to place him head and shoulders above the rest of the light welterweight division, but last December in what was supposed to be Khan’s swansong appearance at 140 lbs, the sheer strength, determination and guts of Peterson saw him come back from a dreadful start to hurt the champion in the second round and cause him problems all night.

Although Khan is a faster and more technically skilled boxer than Peterson, the American levels the playing field with his dogged determination and punching power. Khan may be the bookies favorite in the rematch, but if Peterson can survive the early rounds, this truly is what the Americans term a ”pick-em” fight.

If the rematch is even half as good as their first fight, Khan v Peterson II at the Mandalay Bay Casino in Las Vegas on May 19 will be a treat for fight fans the world over.