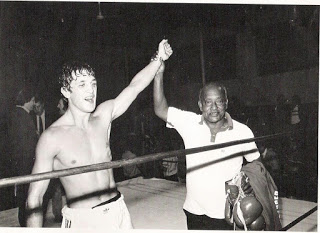 It’s the middle of the week, sometime in 1984.  I’m at the Shamrock Boxing Gym on Hastings near Main.  The gym is not too busy.

I was there, my friend Jamie was there and Manny, my regular sparring partner, was there.  Manny was 14 years old and he’s had about forty amateur fights by then.  He was close to my fighting weight of 132 lbs

Decker was there; Bob Decker the coach and gym owner and also Tony Dowling, Jamie’s manager.
This blond haired middle weight walks in with two older guys.  There was nothing too distinguished about this guy.  5’9″ mediocre muscle tone.  It turns out the guy had won 10 tough man contests and the older guys, businessman, with him, figured that this guy was a prospect. Maybe they figured their “tiger” would be a world champ and they could print money.
Right away Dowling, a shrewd, tough Irishman saw an opportunity.  Dowling had made a living as a professional opponent.  He knew Mickey Duff and he was part of the subculture of boxing. He had been around boxing forever.
They glove the tough man up and put him in with Manny.  Right away the guy’s nose is bleeding.  So Decker pulls Manny aside and tells him to take it easy.

If you glared at this guy his nose sprang a leak.  See Dowling is going to use the business men’s money to promote a card and get my friend Jamie a fight and a payday.
This blond haired guy is now training at the gym. I wanted to spar with him but nobody invited me.  This guy clearly couldn’t box a lick.
I worked with Jamie at a cemetery.  We trained together every night.  Jamie took the middleweight to the aerobics class we went to.  Now Jamie, a junior welter, is sparring with the guy.  Everybody is trying to get this guy ready.
This guy is getting more and more insecure.  I mean he is figuring it out.  He’s getting beat up by a kid; this kind of thing.

Dowling puts this card together at the Cloverdale Fairgrounds, east of Vancouver.  It was about three weeks from when the tough man guy walked into the gym.
Jamie is top of the card.  Fight night we’re out there.   There are maybe 150 people at this card. Jamie’s got an 8 rounder with a guy from Seattle.  The blond guy, the mark, has a four rounder with a mean looking local middleweight.
This guy, the tough man, is now aware that he is totally fucked.  He’s got that sick feeling and it is so hopeless that he doesn’t even bother to warm up.  He probably felt exhausted before the bell rang.
The other guy notices that the “tiger” didn’t warm up.  He says: “He’s cold. I’m gonna knock him out!”

They get in there.  The mean guy starts walking him down.  Buddy boy is running sideways to his left, in a circle.  His gloves are pasted to the side of his face.  It’s futile.  You can’t hide behind your gloves like that.  Two something minutes into the first round the meany catches the toughie with a left hook and knocks him down and out and that basically ended his nascent boxing career.

My friend fought a black guy from Seattle.  We both knew this kid, a good fighter from Seattle, Carl Owens.  He had come up here to Canada for sparring at the Kingsway gym.  Olajide brought him up to work with junior and Jamie got some rounds with him.
This guy was deceptively fast.  He was tough and he had a good work rate.

Jamie beat him but he took a lot of punches doing it.  He won on attrition and sometimes you have too.  It’s not good though; obviously.
The next day we’re back at the cemetery.  I’m looking at Jamie and he has abrasions and contusions.  He’s got lumps on top of his lumps.  He looks like the elephant man, but he wasn’t cut.  He puts on some sunglasses and his face is so misshapen that they sit lopsided on his head. We’re laughing.

At lunchtime we go over to the Brentwood Mall and to the bank so he can deposit his purse. Dowling meets us there and we go in the bank.  Dowling is standing by Jamie and waiting for his cut.  He looked hungry.  Maybe his power was about to be cut off.
The bank teller looks at Jamie and over at Tony. “I see! He takes the punches and you get the money!” Dowling: “I took my share!”  Whatever.  Women loved Jamie.

Seek ye me and live.
kaellisjesse@yahoo.c