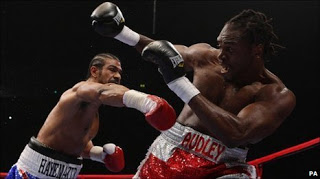 Britain’s WBA heavyweight champion David Haye made a successful second defense of his title when he TKO’d fellow countryman Audley Harrison in third round.

After two cautious rounds that drew boos from the 22,000 crowd at Manchester’s M.E.N Arena, 30 year old Haye (25-1, 23 ko’s) opened up with heavy right hands in the third. A volley of shots floored 39 year old Harrison (27-5, 23 ko’s) for a count of nine, and Haye wasted no time in finishing the job with another barrage of shots which forced referee Luis Pabon to stop the fight at 1:23 of the round.

The result will surely grab the attention of the Klitschko brothers who between them hold the other versions of the heavyweight crown. Haye stated afterward that he wished to unify the belts in 2011.