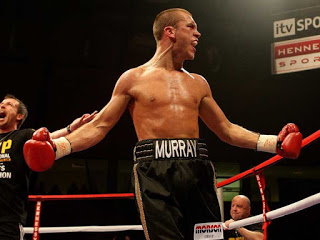 Manchester´s undefeated two-time British lightweight champion John Murray defends his title against Cardiff´s Gary Buckland at the Kingsway Leisure Centre in Widness tonight (Friday).
Murray was originally scheduled to fight Anthony Mezaache for his European lightweight title, but the Frenchman chose instead to vacate the crown, and the European belt is also up for grabs this evening. Murray v Buckland is the main feature on Sky TV´s Live Friday Fight Night and will be screened at 10pm.

25 year old Murray (28-0, 16 ko´s) has gone somewhat under the radar compared to the likes of Amir Khan, Kevin Mitchel and Kell Brook, but he is currently ranked 7th by the WBO and 10th by the WBC, and is on the verge of becoming a star in his own right.
A blue collar ”fighters fighter”, Murray is not flashy, but solid and workmanlike. He boxes behind a high guard and moves forward applying constant pressure to his opponent. Murray at his best fights in a style reminiscent of Mexican modern great Marco Antonio Barrera.

Winning the European title could see Murray rise into the world´s top five at lightweight, a division dominated by Mexican Juan Manuel Marquez, and still mourning the shocking demise of former WBC champion and knockout sensation Edwin Valero, who committed suicide last month after stabbing his wife to death.

The bookies are convinced Murray will do it, and have him a heavy 1/16 favorite (bet365) with Buckland at 7/1.

Murray turned pro in September 2005, and made steady progress through the ranks, scoring 24 straight victories and picking up the 2006 British Young Boxer of the Year award, before he cranked things up a notch in July 2008 with a storming fifth round knockout of Lee Meager for the British lightweight title.
Murray showed his class in January of the following year with an eighth round TKO over Scotland´s hugely talented Lee McAllister, the current Commonwealth lightweight champion.
Murray lost his British title on the scales prior to his defence against Stoke´s Scott Lawton, but stopped Lawton in eight rounds anyway, then regained his crown four months later, pounding Norwich hard-man Jon Thaxton to defeat in four rounds.

No doubt about it, even taking into account a nine month layoff, Murray is on a hot streak, and young Gary Buckland will have to fight at a whole new level just to stay with him.

Buckland (18-1, 6 ko´s) is managed by British boxing legend Ricky Hatton, and his fighting style is similar to that of the ”Hit Man”. He loves to throw lots of body shots accompanied by loud grunts, a la Hatton, although with just six stoppages in nineteen fights, he hasn’t quite got the Hit Man´s power just yet.

Buckland showed his potential with a points win over Scotland´s former Commonwealth super featherweight champion Craig Docherty in February 2009. Buckland followed that up with a close ten round decision over Henry Castle in a British lightweight title eliminator. In February of this year, Buckland outpointed the previously unbeated Swedish based Ugandan Sam Rukundo over twelve rounds, this time in a Commenwealth lightweight title eliminator. The wins over Castle and Ukundo drew Buckland to the attention of the EBU (European Boxing Union) who awarded him a top ten ranking, making eligible to fight for the European title.

Despite what the bookies think, this should be a highly exciting encounter, and could be a lot closer than the odds would suggest. On paper Murray is by far the more experienced and bigger puncher of the two, but Buckland is young, fearless and as his ”Dynamo” nickname would suggest, can fight at a high tempo all night. Murray likes to have room to punch, and Buckland´s tactic will surely be to stay in close, limit Murray´s opportunities to throw his big shots, and apply pressure of his own.

If Buckland gets it wrong, he will be right in front of Murray taking punishment, and it might not last to long.
If he gets it right, it will be a thriller.
I´m thinking the latter, and I can see Murray coming through a surprisingly tough encounter on points or via a late TKO to become the new European lightweight champion.