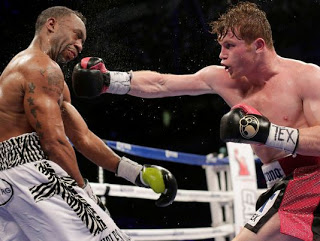 The fight, held in front of a raucous 40,000 crowd at the
Alamodome in San Antonio, Texas was a super welterweight unification bout, and
Canelo has now added Trout´s WBA title to his WBC belt. Although IBF champ Ishe
Smith might have something to say about it, there is little doubt that Alvarez
(42-0-1, 30 KOs) is now the best 154 pounder on the planet, even though Floyd
Mayweather still holds the WBA super middleweight ´´Super Champion“ belt.

Many fight fans had doubted whether the 22
year old Mexican prodigy would have the skill-set needed to defeat a young ,
big, strong, highly capable champion like the 5´10´´, 27 year old Trout who
entered the fight with a 26-0 (14 KOs) record, and was hot off a career-best
and breakthrough points win over modern great Miguel Cotto.
Alvarez had been heavily criticized of late
for fighting ageing veterans (Shane Mosley), ´´shot“ fighters (Kermit
Cintron), and boxers fighting way above their weight limit (Jesusito Lopez).
This was to be a massive step up in class, and one which many experts believed
would expose him as a fighter manufactured by Golden Boy Promotions; a fistic
fraud, if you will. ´´Trout will be too big and too slick“ many believed,
while even the majority of fight fans agreed that this was a terrible matchup
for Alvarez.
However, come fight night, fans were
treated to a highly competitive, exciting contest. While not quite on a par
with the recent Tim Bradley v Ruslan Provodnikov and Mike Alvardo v Brandon Rios
blockbusters, Alvarez v Trout was still a very good fight, with both men
showing great tactical brains as well as skill and power. Although the punch
stats showed that Trout had landed more blows than Alvarez, there could be no
argument that the more telling shots were from the Mexican. The fight was close
after six rounds, with Trout possibly just shading it, but the knockdown early
in the seventh (a vicious Alvarez straight right to the point of Trout´s chin)
changed the whole complex of the fight.
Trout remained competitive until the final
bell, but he was clearly wary of Canelo´s power. For his part Alvarez showed
good movement and stamina, a great chin and excellent defense. 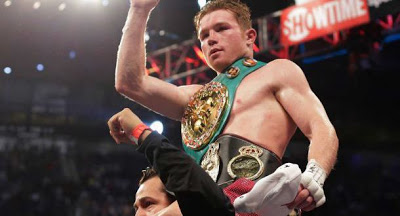 The obvious question now is; should he come
through his May 5 fight against Robert ´´The Ghost“ Guerrero victorious – and
that is by no means guaranteed – would Floyd Mayweather fight Alvarez in 2013?
Mayweather has consistently avoided
fighting dangerous undefeated young champions in his own weight class since his
win over Diego Coralles way back in 2001.
He ducked contemporaries like Antonio Margarito, Paul Williams and Manny
Pacquiao completely, and waited to fight Zab Judah, Oscar De La Hoya, Mosley
and Cotto after they had been defeated or were way past their best.
Ricky Hatton is the exception to the rule,
but although he was an undefeated world champion when he fought Mayweather in
2007, his title was down at light welterweight.
Prior to Canelo´s win over Trout, the
Mayweather brain trust had been considering a bout against the Mexican for later
this year. If Alvarez had won – but been unconvincing – and Mayweather had been
clearly able to see limitations that he could exploit, the fight may have been
a done deal. However now if (and it is a very big ´´if“) Mayweather beats
Guerrero, will he want to risk that precious ´´0“ of his against a 22 year-old
who will have every physical advantage over him, plus enough skill and power to
pose possibly the most dangerous threat of his career?
Unlikely. 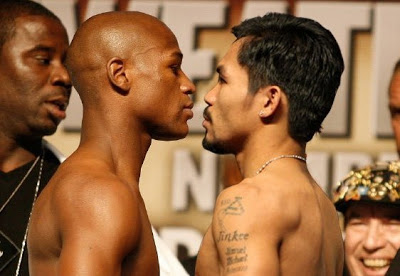 Mayweather v Canelo has just become the
Biggest Show in Town, but it will probably to go the exact same way as
Mayweather v Pacquiao – i.e; it just won’t happen.
Unless of course, Mayweather loses to Guerrero.
And then it will happen, along with a fight with Pacquiao!