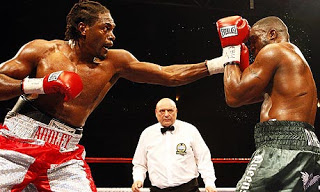 Audley Harrison’s world heavyweight dreams are no longer a crazy idea
With one wicked left hook, the former Olympic champion has gone from public joke to serious contender to the Klitschkos.
Let’s sift through what has become a fascinating heavyweight picture since the best and most important left hook of Audley Harrison’s career. When that single blow exploded on Michael Sprott’s chin less than two minutes from the end of their fight at Alexandra Palace on Friday night, it not only won Audley the vacant European title, it resurrected a career that was headed for the toilet at breakneck speed. Audley finally, at 38, had a proper belt. He could dream again.

Then, even in the glow of Harrison’s greatest comeback, his promoter, Eddie Hearn, son of Barry, wrong-footed the fight trade. He said Audley was giving up the title and would leapfrog David Haye for a world title shot with one of the Klitschko brothers by December.

This sounded like Audley chutzpah of old. Haye, after all, was supposed to be the new saviour of heavyweight boxing. He had beaten John Ruiz into almost certain retirement only a week before. He had kept his WBA title. He was in talks with the Germans about getting his hands on either Wladimir or Vitali Klitschko for his next fight. Then in stepped Audley. It’s not as crazy as it seems, though. read more