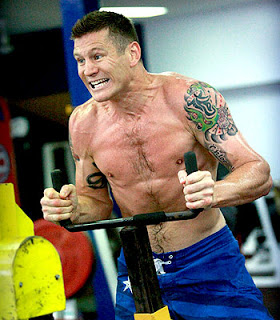 37 year old Aussie slugger Danny Green takes to the ring this Wednesday night when he defends his IBO cruiser-weight title against Puerto Rican veteran Manny Siaca at the Challenge Stadium in Perth, Australia.
Green shocked the boxing world last December when he stopped ring legend Roy Jones Jr in just 122 seconds in Sydney.
In that fight, a huge right to the side of the head floored the former four-division world champion heavily, and when Jones got back on his feet, a sustained barrage of unanswered punches from Green saw the referee call a halt to the fight in the very first round. It was by far the biggest win of the Aussie´s nine year pro career.

Perth native Green (28-3, 25 ko´s), a former WBA light-heavyweight champion, will be taking part in his fourth fight in just 12 months when he takes on former WBA super-middleweight champion Siaca (22-6, 19 ko´s).
Prior to that, Green had spent 19 months out of the ring following his decision to retire after outpointing American Stripe Drews for the WBA light-heavyweight title in December 2007 after failing to secure a rematch with bitter rival Anthony Mundine.

Something of a cult hero in Australia, Green was a late starter in boxing, and was already 28 when he turned pro in 2001. With his crowd pleasing – big punching style, his tattoos and occasional Mohawk hairdo, plus his love of a controversial sound-bite, Green is a big favorite with Aussie sports fans.

After scoring 16 straight knockouts, Green challenged Germany´s Marcus Beyer for his WBC super-middleweight title in 2003, losing on a fifth round disqualification after a deliberate headbutt. In 2005 he again challenged Bayer, this time losing on a majority decision. Both contests took place in Germany, and in both bouts Green had Beyer on the canvas.

In May 2006, Green met fellow controversial Aussie boxing star Anthony Mundine in a WBA super-middleweight title eliminator before 30,000 fans in what was one of the biggest fights in Australian ring history. Mundine won a close but unanimous decision.
For Green, the dream fight, and indeed the fight that the whole of Australia wants to see, remains a rematch with Mundine. In the meantime, he must deal with Siaca.

At this Monday´s press conference in Perth Green said;

“This won’t be an easy fight whatsoever. He is a cagey guy, he’s been around a long time. He’s the kind of fighter you simply can’t take for granted. All those reports out there that he hasn’t been fighting, that’s true, but one thing you can’t take for granted is his experience, caginess and his background. His whole life has been boxing. We know that, we’re aware of that and mentally that’s why I’ve focused hard on this fight. It’s a world title defence, it’s going to be a massive fight. We’ve done the hard work … now it’s just time to relax, weigh in tomorrow and when the bell goes on Wednesday night I’ll be ready to rumble.”

In comparison to Green´s recent activity, Siaca has only fought twice in the last four years, and has had just one round of action since May 2008. The bookies have Green a prohibitive 1/7 favorite with Siaca a 4/1 underdog (bet365) but the Puerto Rican has been an excellent boxer-puncher in the past – is three years Green´s junior at 34, and is confident he will cause an upset.

He told the Australian press earlier this week;

Turning pro in 1997, Siaca took a record of 14-1 into a September 2000 WBA super-middleweight title challenge against Frenchman Bruno Girrard in France. Girrad was awarded a highly controversial split decision, and when he subsequently declined to give Siaca a rematch, Girrard was stripped of the title by the WBA.

Siaca faced American Byron ”Pinky” Mitchell for the vacant title, and despite building up a huge points lead, Siaca faded down the stretch and was TKO´d by Mitchell in the 12th .

In 2001, Siaca met Mitchell again, at Madison Square Garden on the Bernard Hopkins v Felix Trinidad undercard. This time it went the distance, but Siaca lost a split-decision.

In May 2004 Siaca beat Anthony Mundine in his own New South Wales backyard, knocking him down in the second round and taking a split-decision and Mundine´s WBA super-middleweight crown in the process. It was fourth time lucky for the gutsy Puerto Rican, and remains the highpoint performance of his career.

Unfortunately Siaca was unable to enjoy his champion´s reign for long. Waiting in the wings was the menacing Dane Mikkel Kessler, who along with Welsh legend Joe Calzaghe was the outstanding super-middleweight of the past decade. Siaca had no answer to the Dane´s sharp boxing and awesome power when the two met in Copenhagen in November 2004, and Siaca was retired after seven rounds.

If the fight with Green had taken place five years ago, Siaca would have been the clear favorite to win. The Aussie may hit murderously hard, but he is limited in movement, and comes at an opponent in a straight line. Clever boxers like Mundine and Beyer have taken advantage of Green´s limitations, and at his best Siaca was a better boxer than either of those two.

But Siaca has been in virtual retirement since being thrashed on points by Italian former WBA light-heavyweight champion Silvio Branco in 2006. Also, Green, once slim at super-middleweight, now looks tremendously powerful at cruiser-weight and in this writers opinion will be a threat against any of the top men in the division.

Siaca has apparently trained hard for ten weeks for this fight. If he is fit and motivated, can get through the first three rounds and get some rhythm going, it could become very interesting indeed.

But I feel that Green will be all over the Puerto Rican like a rash from the very first bell, and it wont be long before he is connecting with those big shots of his.

Green by TKO inside three rounds.