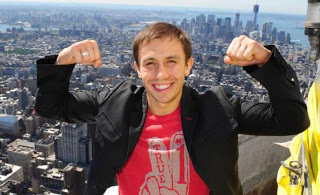 Gennady Golovkin vs Sergio Martinez: Just saying that sentence makes me excited, as I´m sure it does millions of fight fans the world over.
If there is another matchup as mouthwatering as this middleweight unification fight between the top-two 160 pounders on the planet, I am not aware of it.

Sure, Nonito Donaire v Guillermo Rigondeax looks good on paper, but in reality it could turn in to a mismatch between a vastly experienced pro and a vastly experienced amateur. Adrian Broner v Ricky Burns? A great matchup, especially if you like chess. Floyd Mayweather vs zzzzzz… oh sorry, I dozed off for a second. 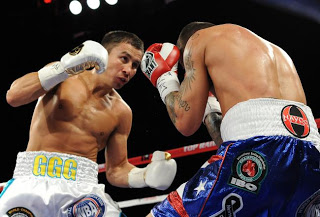 Like I said, Golovkin v Martinez is THE fight that excites me more than any other. I have long been an admirer of the swashbuckling southpaw Argentinian Martinez, and the Russian freight-rain that is WBA middleweight champ Golovkin has been beating the living daylights out of all of his recent rivals and is becoming a HBO darling, but who would win?

Sergio Martinez (50-2-2, 28 KOs) is universally regarded as the best middleweight in the world, and has been since he defeated the Gennady Golovkin of his day – Kelly Pavlik – for WBC  and WBO belts back in April 2010. He has defended his linear crown (the WBC saw fit to “elevate” Martinez to Diamond status for a portion of his championship reign) five times, most impressively with his stunning second round blitzkrieg of former nemesis Paul Williams, also in 2010. 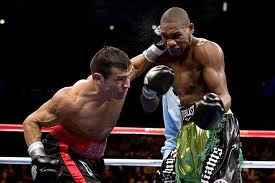 The 5’10” former junior middleweight champ turns 38 next month, and while he retains the speed and stamina of a man a decade younger, he clearly cannot go on for ever. Unlike ex-long-time middleweight king Bernard Hopkins who will be 48 when he challenges Tavoris Cloud for his IBF light heavyweight crown in March, Martinez, while elusive, is not that great fighter defensively, and has hit the canvas regularly during his career, including his last two title defenses against Irish Brummie Mathew Macklin (7th) and Mexican cruiserweight Julio Cesar Chavez Jr (12th).

Martinez recovered to batter the game Macklin into an 11th round retirement, and survived the final few seconds of his bout with Chavez, his victory secure after he had virtually shut out the defending WBC “regular” champ for the first eleven rounds. Nevertheless, Martinez´supporter would have to worry that if Macklin, Chavez, Darren Barker- who broke Martinez´nose and Pavlik, who also floored the Argentinian , could all catch him with clean shots, what could a consistent power puncher like Golovkin do to him?

30 year old Golovkin (25-0, 22 KOs) was born and raised in Kazakhstan of Russian parents, and is now based in Germany. He was a vastly experienced amateur who won a World title in 2003 and an Olympic silver at the Athens games in 2004. As an amateur he defeated future pro stars Andy Lee, Andre Dirrell, Daniel Geale and Lucian Bute. Golovkin´s last two fights have been in the US, and his English is good, so a one would think a permanent move to America, especially as his star is certainly rising in the West, is on the cards.

Is Golovkin as good as Kelly Pavlik or even Arthur Abraham were at middleweight? Right now I would have to say I don’t think he´s anywhere near either man was when they were at their best about five years ago (I can hear the sound of Golovkin´s supporters sharpening their knives already!) But he is improving all the time, and as his performance against Philadelphia´s Gabriel Rosado showed, he has perfected a blend relentless pressure and power punching, allied with an apparent imperiousness to damage that makes him a truly irresistible force at 160 pounds.

I think Golovkin has solid power in all of his shots and takes a great punch, but I also think he is a little basic, one dimensional, and takes a lot of punishment. Okay, right now because he is at his peak, very tough and super confident, he is walking through those shots, but if he were to come up against a puncher like Martinez, his chin would be severely tested. And although he has looked sensational recently against Grzegorz Proska and Rosado, Proska was wide open all night on the way to being hammered in five rounds, while Rosado was game but totally outclassed. What Golovkin desperately needs before he takes on someone of the caliber of Martinez is real test against a world class middleweight.

Martinez is committed to a title defense against Britain´s undefeated Martin Murray in Buenos Aires in April, and then is most likely to fight once more later in the year. The Murray fight will be no pushover, but if Martinez comes through unscathed, his options will include a rematch with Chavez Jr and  a fight against Golovkin.

Golovkin has time to squeeze one more fight in before a potential Martinez matchup, and his management should choose an opponent that will genuinely test him. Someone like a Felix Sturm, a Mathew Macklin or even a Chavez Jr (what a war that would be, although I think ultimately Golovkin would win by TKO.) 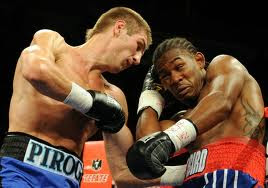 However the perfect opponent to sharpen up Golovkin for a Martinez fight would be fellow Russian Dmitry Pirog,  the former WBO 160 lb. champ. Pirog is a slick stylist who learned his skills from watching tapes of Sugar Ray Leonard and Floyd Mayweather as a kid. Although not a southpaw, like Martinez he carries his hands low and throws punches from odd angles. And like Martinez, Pirog can bang. Should Golovkin v Pirog take place, and if Golovkin were to defeat Pirog emphatically, he would surely start as a bookies favorite in a unification bout against Martinez.