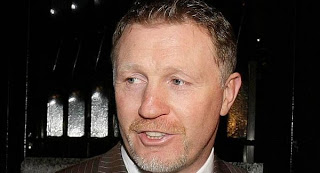 Former WBO
super middleweight champion Steve Collins of Ireland has announced his
intentions of returning to the ring after a 16 year hiatus for a one-off fight against
America’s legendary four-weight world champion Roy Jones Jr, possibly in April.
Speaking to
talkSPORT radio earlier this week Collins said: “It’s not a comeback as such,
at my age I’m too old for that, but it will be the end of a15-year grudge. It’s
a fight Roy Jones needs. He claims to be one of the greatest pound-for-pound
fighters around but he refused to fight me. I was very happy with my career,
but the one fight I wanted was Roy Jones, and when that didn’t happen I
retired. To me he was afraid of me. I don’t think he’s a coward, but at the
time he was! But now it’s happening. I spoke to Roy and we’re going to get it
on. He wants one more fight before he retires and this is the one he wants. If
we get a good offer we’ll split it down the middle and get it on.”
Collins
says he will only fight if doctors pass him fit and added: “I wouldn’t even consider
fighting a guy 15 or 20 years younger than me, because that’s not a match. But
we’re the same age and this is a fair match. It won’t be any different to how it
would have been 15 years ago. I’d love the fight to be in the UK but there is
interest from Dubai, Russia, China. Dubai looks the favorite, but we’ll have to
see where the offers come from.” 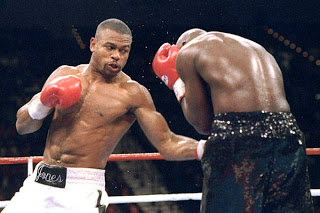 Roy Jones Jr
(56-8, 40 KOs), now aged 44, is a former four-weight world champion and is regarded
by many fans and experts as one of the greatest fighters of all time, and
possibly the best boxer of the 1990s. He won world titles at middleweight,
super-middleweight, light-heavyweight and heavyweight, defeating the likes of
Bernard Hopkins, James Toney, Mike McCallum and Virgil Hill. In 2003 he did the
unthinkable and became the first former middleweight world champion to win a
world heavyweight crown since Britain´s Bob Fitzsimmons 106 years earlier when
he defeated John Ruiz to lift the WBA title.
It was to
be the climax of his career. Dropping back down to light heavyweight later that
year, Jones looked jaded outpointing Antonio Tarver to regain the WBC title in
a desperately close fight. The signs were there that Jones was on the slide,
and they were compounded when he was KO´d in two rounds in a rematch with
Tarver the following year.
Since then,
Jones´ decline has been dramatic, and he has lost seven of his last 14 fights,
four inside the distance. Three of those losses, to Tarver, Glen Johnson and
Dennis Lebedev were sickening KO´s that had fans and writers calling for Jones
to retire.
However Jones
is adamant that he will continue fighting until he wins a world cruiserweight
crown, the only title missing from his collection. Speaking to talkSport Jones
said:
“I’ve
spoken to Steve (Collins) and I said ‘I don’t duck or dive nobody’, so it’s a
very big possibility. I wasn’t looking for him but when he said he wanted to
fight me I was like, ‘OK’. I don’t know where the animosity came from but if
that’s what he wants, he can get it. I said ‘hey, I’m sorry it didn’t happen
when it should have happened, it wasn’t because of me – but if that’s what you
want to do, I don’t see no problem with it’.”
Regarding
questions of his retirement Jones said: “If a guy asks to fight me it’s
very difficult to say no when I’m still looking and feeling so good and still
doing my thing. The fans never told me I should start so why should they tell
me when to finish? They don’t know me more than I know myself, so how can they
tell me what I should do? I’ve got nothing left to prove in the sport but I
want to win a cruiserweight title before I leave, so I’ve won every title
available from middleweight to heavyweight. If I can get the cruiserweight
title, I’m done, I’m out of here. If that’s the goal I set I, of all people,
deserve the right to go for that goal because of all I did for boxing.” 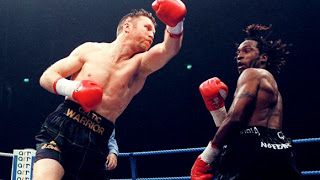 Collins,
now 48 years old, briefly held the WBO version of the world middleweight title
in 1994, and the following year stepped up to 168 pounds and defeated
long-standing WBO super middleweight champion Chris Eubank on a unanimous 12
round decision. Over the next three years, Collins would defend his title seven
times, scoring another points win over Eubank in a return, and stopping former two-weight
world champion Nigel Benn twice. Collins claims that he retired in 1998 because
of his frustration of being unable to land a unification bout with Roy Jones Jr,
although ironically Jones was the WBC light heavyweight champion at the time,
and had not boxed at 168 lbs. for two years. Collins quit the ring with a
record of 36 victories against just three defeats (21 KOs).
Although
most UK fight fans remember Collins for his exploits against the likes of
Eubank and Benn, he had a very respectable career prior to that in the United
States. Born and raised in Ireland, Collins turned professional aged 22 in
Mickey Ward’s hometown of Lowell, Massachusetts. He fought extensively in the
United States over the next four years, winning his first 16 fights before
losing to the great Mike McCallum for the WBA middleweight title in 1990.
After five more
victories, Collins fought for the vacant WBA middleweight title against Reggie
Johnson, but came up short again, losing a majority decision. In his very next
bout in October 1992, he suffered his third and final defeat against Sumbu Kalambay
for the European middleweight title.
The
following year Collins decided to base himself in Britain where the middle and
super middleweight divisions were enjoying a boom, and after six straight
victories captured the WBO middleweight title with a fifth-round TKO over Chris
Pyatt. The following year he made his move up to super middleweight and his
great rivalries with Chris Eubank and Nigel Benn began.