Home Archive Former middleweight champ Kelly Pavlik puts his demons behind him as he... 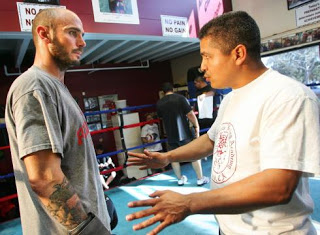 Few fighters in recent years have had such a dramatic fall from grace as ex-middleweight world champ Kelly Pavlik, who continues his comeback with a bout against Aaron Jaco at the aptly named Illusion Theater in San Antonio, Texas later tonight. Many boxing experts would have you believe that Pavlik’s comeback is just an illusion, and the reality is that the one-time Golden Boy of American boxing has fallen out of love with the sport and is simply going through the motions – a view this writer strongly disagrees with. However he is unlikely to be tested too hard tonight by Jaco, a 35 year old light heavyweight who returned to boxing last year after a five year hiatus from the ring.
Cast your mind back to June 2008; Kelly Pavlik had just rubber-stamped his position as one of the most marketable commodities in boxing – a white American world champion who could really fight – with an easy third round bludgeoning over a brave but out-gunned Welshman Gary Lockett. Just month’s earlier Pavlik had proved that his sensational title-winning seventh round KO over Jermaine Taylor – the man who had done the unthinkable and ended the middleweight championship reign of Bernard Hopkins – by comfortably outpointing him in a rematch – proving he could box as well as brawl.
At 6’2”, with a simple yet effective style of a stiff left jab and a straight right of concussive proportions, allied to a blue-collar work ethic forged in his hometown of Youngstown, Ohio, the polite, softly spoken Pavlik was a breath of fresh air to fight fans growing disillusioned with the amount of trash talking and cynicism in the sport they loved. In June 2008 the future looked bright for Pavlik, who could have guessed that just three years later he would hit rock bottom, both as a fighter and as a man?
Even when Pavlik’s limitations were exposed when handed a boxing lesson by Hopkins in a late 2008 non-title catch weight fight, fans and experts agreed that it was all part of the learning process, and he was still headed for greatness. Pavlik kept winning, although less impressively, stopping Marco Antonio Rubio (RTD 9) and Miguel Angel Espino (TKO 5) in 2009. A proposed fight with the dangerous Paul Williams was scrapped when Pavlik went down with a staff infection in his left hand.
In April 2010, Pavlik faced the man who had lost to Williams on a controversial decision – Sergio Martinez, a handsome but ageing Argentinian with a flashy, swashbuckling style – and despite having all of the physical advantages and flooring his man in the seventh, Pavlik finished the fight cut and well beaten on points.
The loss of his title affected Pavlik deeply. Rumors of drunken episodes in Youngstown began to emerge, and it soon became apparent that the fighter had a history of alcoholism, even when he had been boxing, not unlike another talented white fighter – former IBF lightweight champ Paul Spadafora. So severe were Pavlik’s alcohol issues that he twice checked himself into the Betty Ford clinic to undergo rehabilitation.
Pavlik returned to action last March and looked unimpressive as he struggled to outpoint Alfonso Lopez on a majority decision.
Long-time promoter Bob Arum stuck by Pavlik, even after he had come close to committing professional suicide by pulling out of a fight with Darryl Cunningham last August that would have set him up for a shot at Lucian Bute for the IBF super middleweight title, claiming his $1.35 million purse for the Bute fight was ”too small.”
Pavlik sacked his longtime trainer Jack Loew soon after, and is now being coached by Robert Garcia, himself a former world champion at super featherweight and now one of the most sought after young trainers in the game, with no lesser a name than Nonito Donaire among his fighters. One of the stipulations of 29 year old Pavlik’s (37-2, 32 KOs) continued relationship with Arum and his Top Rank promotional company is that he uproot himself from Youngstown and the negative influences there, and relocate to Oxnard, California, where Garcia has his gym.
Tonight Pavlik takes on 35 year old Jaco (15-2, 5 KOs) a menacing looking fighter who’s record doesn’t quite match up to his appearance. A ten year veteran, Jaco has boxed at light heavyweight throughout career, except for a June 2005 loss to Chad Van Sickle for the NABA cruiserweight title in which he was stopped in eight rounds – his first defeat in fourteen bouts.
Jaco was stopped again in his next fight, a second round knockout to journeyman Rodney Moore – a result that pretty much tolled the death knell over Jaco’s ring ambitions.
A points win over Sven Haselhuhn in Germany in 2006 was followed by five years of inactivity. Jaco returned to action last November with a one-round knockout over Brian Bernard, a result that can only make one wonder at the standard of Bernard.
Pavlik has added some hardcore tattoos to his frame since his championship days, and with Jaco’s similar selection of ”skin illustrations” (anyone else remember that Rod Steiger movie?), these two resemble a pair of UFC combatants or extras from ‘Prison Break’ more than they do traditional prizefighters.
Jaco will do well to extend Pavlik into the middle rounds tonight, but this is by far the biggest fight of his life, so accordingly he should be in the best shape of his career. He will be hoping to pull off what would be the biggest upset of the year so far.
I believe that if Pavlik came out with all guns blazing he could end this very early, but I think that both he and Garcia want to get some rounds under his belt. I therefore see Pavlik using the early rounds to shake off some ring-rust before he starts letting his punches go, and stopping Jaco in the sixth.